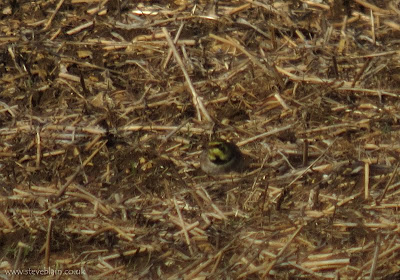 Back to Galley Hill early this afternoon in search of yesterday's Shore Lark and, this time, success! Many thanks to Steve Blain for staying around to help locate the bird for me, letting me look through his 'scope, and allowing me to display his photo of this cracking bird above (the photo was taken yesterday). The Lapland Buntings were proving very elusive today, but a small group of us managed to get some great views of the male.

The County's top birders have enjoyed increasing their Bedfordshire bird species list this weekend. The current totals are:
Dave Ball - 256
Barry Nightingale - 256
Peter Smith - 255
Martin Palmer - 255
Dave Odell - 255
I'm not an ardent 'lister', and haven't gone out of my way to see a couple of the rarer birds flying through....so I'm miles behind on a paltry 216, but really pleased to have been a part of the excitement this weekend!
Posted by Steve Plummer at 5:52 PM No comments:

The hail & driving rain took something of the anticipated polish off the Leicester-Bath game at Welford Road so, when news of a Shore Lark at Galley Hill just east of Luton came through, it really was no contest!

I arrived to find the great & good of Bedfordshire's birding fraternity in a frenzy of excitement. The Shore Lark - only the 5th one found in the County - had been a County 'tick' for all of these longstanding local twitchers but, whilst scouring the empty fields, two (yes, two) Lapland Buntings had also been located in the midst of the Skylark flock....adding up to an amazing two County ticks in a few hours, the only previous 'Lap Bunt' in Bedfordshire being recorded in the same year that England won the World Cup! It's reckoned that these birds had probably bred in Greenland.

Unfortunately, the stir caused by the Lapland Buntings had understandably drawn attention away from the Shore Lark, which had not been seen for a while before I arrived, and didn't reappear for the rest of the afternoon. But I was well chuffed to see the Lapland Buntings (a male and female), including great views of the two of them flying around in the bright sunshine.
Posted by Steve Plummer at 7:06 PM No comments:

I really enjoyed an hour's wander over the fields near Eversholt. 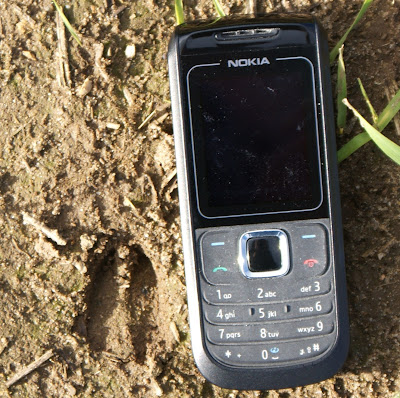 This small deer slot is only 3cm long and almost certainly belongs to a Muntjac deer. 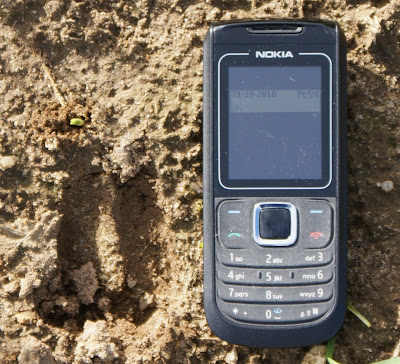 This deer slot is a lot more problematic. At just over 5cm long, it's too large for Muntjac, Roe, or Chinese Water Deer, but it's too small for an adult Fallow or Sika Deer. I reckon that it must be a young Fallow Deer though, in this area alongside the Woburn Abbey Estate, it could be anything!

There were hundreds of Red-legged Partridges and Pheasants strutting, calling and 'helicoptering' about. I reckon that there's at least 17 individuals present in this photo....and the majority will probably end up on someone's dinner table! There has been a debate about the effect of these game birds on the populations of other animals where they are intensively stocked (In the UK we release between 30,000,000 & 40,000,000 ever year!!). It's reckoned that there wouldn't be many Common Lizards in an area like this, for instance! If you're a Red Fox, or a Polecat, or Stoat, though, it must seem like Christmas has come early!

The photos above were taken yesterday afternoon. I returned early this morning hoping to catch some deer out in the open.

This slot is about 7cm, though there's a lot of slippage in the wet mud.

In the end, this distant male Muntjac was the only deer seen this morning, but I wonder just how many are seeing the day out in the middle of the numerous woods of this area!
Posted by Steve Plummer at 1:09 AM No comments: 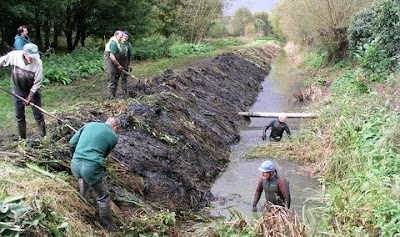 [This photo by permission of John Pitts]

I can’t believe that it’s been so long since I was last out in the local countryside! At the end of the morning, I took the opportunity to meet up with the Greensand Volunteers who were doing a great job clearing a clogged-up water channel at Flitton Moor. The other reason was to spend an hour or two searching for Harvest Mouse nests. 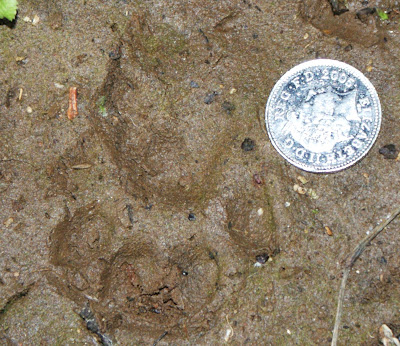 This Otter print was under the bridge from which the first photo was taken. I reckon that it’s a left fore print. It’s about 6 ½ cm long, with 5 toes – the 1st & 5th toes not being aligned. I think I can just make out a faint webbing mark in the soft mud.

There was also some old spraint on a log under the bridge. Even though it was old, the smell was very fishy.

This dropping was old, too. There was no fishy whiff, but there definitely was a distinct lingering odour – almost certainly Mink. 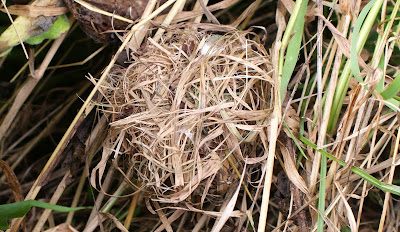 I’d gone down to the Moor to catch up with the Greensand Volunteers and to do a quick search for Harvest Mouse nests. In the first clump of Common Reed, within 5 minutes of starting the search, I found this nest - unbelievable!! 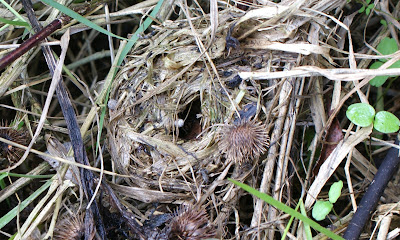 Then, a hundred metres or so down the footpath in another patch of Common Reed alongside the River Flit I found this old nest close to the ground. 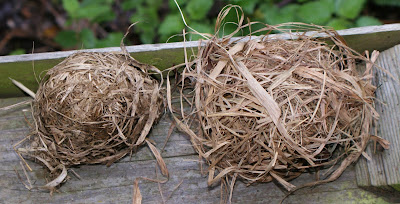 Here are the 2 nests together, which gives you an idea of the difference in size. 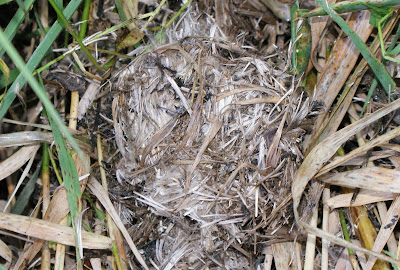 On the way home I stopped off and quickly examined the Common Reed in a field alongside the road near the Silsoe turn of the A503. I soon found this interesting ‘nest’ lying on top of some Common Reed alongside in the vicinity of some thistles. The leaves seem to suggest that it has been constructed by a Harvest Mouse, but it consists almost entirely of thistle down, as you can see in this photo of the ‘nest’ broken open: 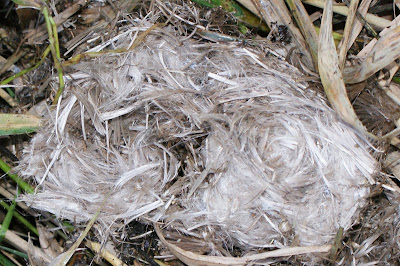 Is it a Harvest Mouse nest? I need to show it to someone else to confirm that or otherwise.
Posted by Steve Plummer at 10:13 PM No comments:

Carole screamed and quickly pulled her legs up onto the sofa when this spider suddenly ran across the living room carpet in front of her.

I find identifying spiders quite a challenge, but this is probably the female Giant House Spider (Tegenaria gigantea) or at least a Tegenaria sp. (the species are not easy to separate out by photo). Those jaws look pretty fiercesome, but the bite is not supposed to be able to pierce the skin of the likes of you and me. I have picked these up at various times but, between you and me, I do feel more than a little apprehensive when doing so!

According to Wikipedia, this species used to hold the record for the top spider speed, reaching 9.73 feet per second (2.97 metres per second) at full whack!

At Carole's insistence, this one ended up in the front garden (using a large glass and piece of card!), but I usually leave them to wander around and hoover up the invertebrate life that we don't see!
Posted by Steve Plummer at 6:05 PM No comments:

An interesting drive around the Steppingley area with the following sightings:

4.40am - Large Badger running along the road by the Eversholt cricket pitch.
4.51am - Barn Owl close to Milton Bryan.
5am - Great views of a Badger (presumably the same one as above) on the road by Eversholt cricket pitch, together with 3 Rabbits.
5.16am - Brown Hare, a number of Rabbits, and a covey of Red-legged Partridges in field close to Steppingley.
5.21am - Female Muntjac in the verge close to Steppingley.

When you go out at night you just never know what you're going to see. I was really surprised only to come across one deer, though another larger unidentified deer crossed the road in the distance when I was looking at the Muntjac. The Badger sighting was a real bonus - I'm surprised I haven't seen more during my nocturnal wanderings!
Posted by Steve Plummer at 6:24 AM No comments: 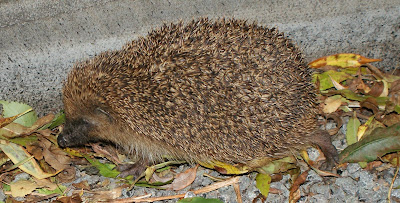 This Hedgehog was wandering about on the road that runs through Milton Bryan just after 5am this morning. It's sporting some 6,000 spines and probably harbouring some 500 fleas! This one was looking very healthy - it will be looking to hibernate for the winter in a few weeks time. It's good to see a Hedgehog in this area where there are a number of Badgers. I'm convinced that there are a lot less Hedgehogs around because there are a lot more Badgers around!

I'm hoping to get out and about again in the early hours of tomorrow morning....before joining my eldest son for the Japanese Grand Prix at 6am!
Posted by Steve Plummer at 8:29 PM No comments:

My mind continues to be exercised and so I went for a much needed walk this afternoon to clear my head. My choice of location was a local wood, which I enjoyed wandering round in the midst of a strong breeze. 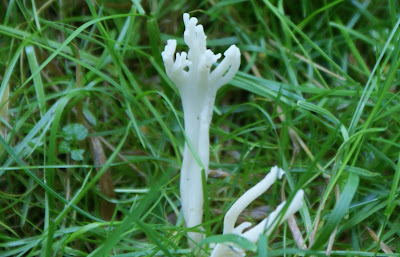 There were fungi everywhere including club fungi. I think that this is Wrinkled Club…. 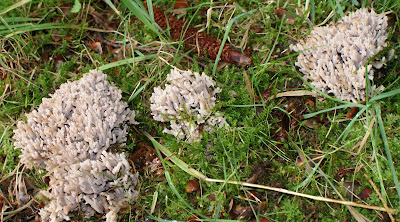 …but I’ve no idea what this species of coral fungus is!

There are also Fallow Deer around though, these droppings being characteristically pointed at one end and indented at the other. 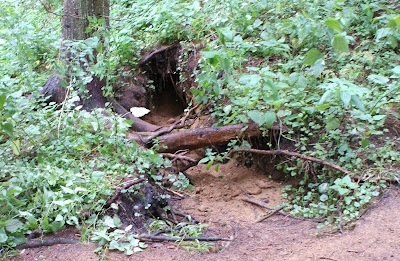 And this Badger sett was interesting. It looks like the Badger is a bit of an architect!

This area is a part of the Greensand Ridge which means that there is a lot of sandstone around. This nondescript-looking block holds a secret, the two separate parts revealing this:

Our Geology Recorder, Martin Whiteley, has furnished me with the following information:

"What you've found are ironstone concretions within a block of Woburn Sands Formation sandstone (otherwise known as the Lower Greensand). These concretions are very common and probably form as the loose sand grains start to become compacted and de-watered as they are progressively buried beneath the sea floor after deposition.

Iron-rich fluids pass through the sand grains and locally precipitate into a wide variety of circular and elliptical forms. The iron-rich 'rinds' are usually dark brown or purple in colour and may enclose sand grains that are less well cemented than those elsewhere in the rock. Some concretions closely resemble burrows that were formed by sea floor dwelling animals such as crustaceans when the sandstone was being deposited, and in these cases it seems as if the iron-rich fluids were preferentially deposited in the lining of the old burrows.

The precise reason why iron is deposited in such curious forms is not really known, but variations in the permeability of the enclosing sediment and the chemical composition of the migrating fluids are probably key."
Posted by Steve Plummer at 11:37 PM 1 comment: