After several days indoors, and beginning to exhibit signs of 'cabin fever', I thought that it was about time I got out, electing for a gentle stroll over Cooper's Hill and Ampthill Park. A week ago, I drove over to Stotfold in order to witness the extraordinary gathering of 700+ Corn Buntings there which has made the national media. You can see some great photos here. Unfortunately, I couldn't stay long and missed the regular Merlin (who obviously knows when it's on to a good thing!), so I was really encouraged to have a stunning male Merlin fly right over my head in the Park (my 88th bird species there). I also flushed a Woodcock whilst exploring some scrub.

The other highlight was these three Muntjac deer who were browsing together at the southern end of The Darkenings: two males and a female. It's unusual to see three Muntjac together unless it's a pair with a fawn. Twin births are rare, but I did wonder if the males were siblings and continuing to spend their time with their mother. They both look relatively immature to me...I'm not sure how long a fawn will normally remain with the mother, nor when the antlers start to grow, which would help (Muntjac are unusual in breeding at any time in the year which complicates things). 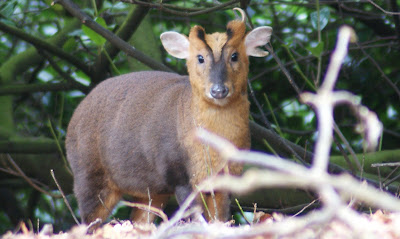 This one shouldn't be difficult to spot in the future with its single antler and torn ear. 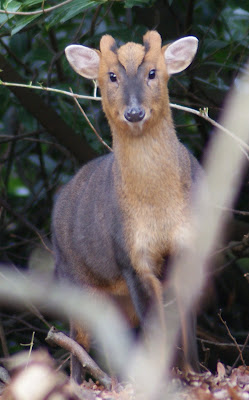 And here's the other...he looks well-nigh perfect! And now for something completely different......... 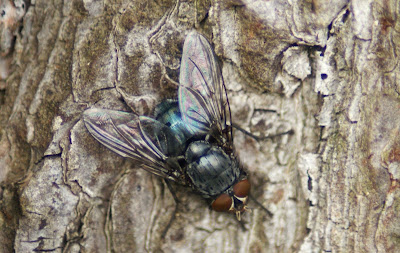 I deliberately walked over the heathland at Cooper's Hill to look for any flies that might be out enjoying the rare sunshine. There were several Calliphorid blowflies on the pine trunks facing the sun. 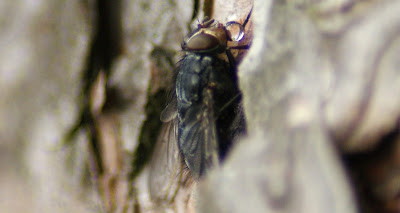 This one is blowing a bubble, which is surprisingly common in these flies.

Update:Our Beds Mammal Recorder, Richard, had informed me that antlers develop in Muntjac between the ages of 32 and 76 weeks, the pedicles developing from about 20 weeks. They are weaned at about 8 weeks but they seem to stay with the doe for rather longer (not sure exactly how long). You do get doe and buck muntjac staying together for a while, but usually during the mating period. The bucks could be siblings, but they do looke 'different' and this is more likely to be doe and buck with a fawn about to depart.
Posted by Steve Plummer at 5:47 PM No comments: 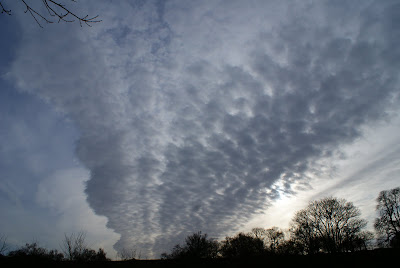 I've only just transferred this photo from the camera to the computer. It was taken a month ago on 8th December when I noticed what I think was a weather-front, a big bank of cloud, approaching and then going over Ampthill Park. It was pretty impressive. You can just see Katherine's Cross on the top of the Greensand Ridge. The photo was taken, late afternoon, just north of The Rezzy.

Update: Angela, our Meteorology Recorder, thinks that this formation is Stratoculumus Undulatus, which is described as patchy sheets or layers with parallel undulations.
Posted by Steve Plummer at 12:23 PM 1 comment:

I’ve always found the countryside a place of healing. After listening to a colleague’s experience of deep sadness this morning I needed to walk in the fresh air for a short while so, on the way home, I stopped off at some of my favourite Bedfordshire fields.

I came across 24 Brown Hares in total, including 12 fairly close to one another. You may have heard of the expression, ‘a Parliament of Rooks’, referring to the occasions when they perch on the ground cawing at one another. But you can also get a Parliament of Hares!

Brown Hares are thought to have been introduced to our shores by the Romans. Chinese Water Deer come from Asia….and we know exactly who they were introduced by: the Duke of Bedford, which I'll come to in a moment. You can tell that this individual is a male by the 'tusk' protruding from under the top lip.

It was the 11th Duke of Bedford who first imported a pair of Chinese Water Deer for his collection at Woburn around the turn of the twentieth century. Both of these died, but individuals from further introductions escaped during the war and established themselves in the local area. I came across 7 here today, with another 7 seen from the car in various places. Last Saturday I went for a walk in Millbrook Plantation and had 21 separate sightings, plus another 5 in the field nearby! On one occasion in February last year, I counted 40 whilst standing at a gateway and panning across the nearby fields!

Posted by Steve Plummer at 9:09 PM No comments:

If you had lived in Norfolk years ago and were invited around to a friend’s home for Sunday roast butterbump, you would find yourself devouring a plate of Bittern meat: termed butterbump because of the amount of fat.

Unfortunately, Bitterns are a lot less common nowadays, though our small breeding population are supplemented each year by continental birds escaping the big freeze across the Channel.

This is the time of year to catch up with a Bittern in Bedfordshire, and expectant birders grabbed their bins and ‘scopes and headed for Brogborough Lake at the weekend following a report of 2, and then – amazingly, 3 individuals ‘showing’ well around the reedbed margins of the water.

So, with blue skies and sunshine, and a bit of time owing, I decided to spend an extended lunch hour at the lake, which is just a few miles down the road. It turned out to be a good decision and heralded some fantastic views of this amazing bird….and more besides!

I arrived at Brogborough to find the Lake frozen over, except for 2 relatively small ice-free patches that were filled with birds including Goldeneye, Scaup, and Red-crested Pochard.

Roy Nye had been there for a while and, though he hadn’t yet seen a Bittern, he had watched a Red Fox right out on the ice and making its way around the lake margin

Just after 1pm, I picked up a bittern standing out on the ice at the north end of the Lake. As we watched, it took off to join another Bittern that had flown right over the top of it. The flew together around the back of some islands and landed in a patch of reeds where we watched the pair of them wandering about for several minutes before they eventually went out of view. During this time we had watched the Red Fox on several occasions as it wandered around in front of the reeds and northern islands searching for food.

It wasn’t too long before one of these birds reappeared again on the frozen surface of the lake – a year ‘tick’ for John Temple who had just arrived. Once again, we were fortunate to see another Bittern fly right over the top of this bird and, as we followed it in the ‘scopes, a raptor suddenly dived into view and struck the Bittern. There was an explosion of feathers and the Bittern dropped into a patch of reeds immediately below. The large female Peregrine Falcon, for that is what it was, banked right and unsuccessfully tried to pick up some duck for lunch at the main stretch of open water in front of the watch point.

It was just before 2pm now, and I picked up another bittern - almost certainly the 3rd bittern - slowly skating eastwards. It paused before entering a patch of reeds, but not before briefly flushing a Water Rail!

On the hour, the Red Fox flushed the Bittern that had been hit by the Peregrine Falcon: this bird was obviously having a bad-feather-day! This Bittern then flew to a point in another section of reeds where it spent some time perched on the top of the reeds, obviously keeping an eye on the fox.

It’s going to be a good year!
Posted by Steve Plummer at 6:47 PM No comments: