Moths from near and far!

Everyone agrees that moth trapping so far this year has been pretty dire, but we're all hoping that the numbers and species start to pick up over the next few weeks. On the other hand, it's actually been a pretty exciting few weeks for some of the migrants making their way across the Channel in suitable winds. 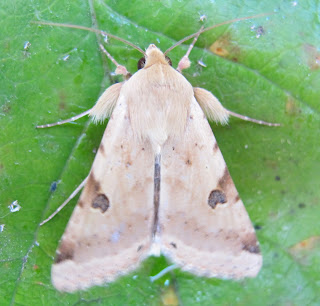 Bordered Straws have been turning up in good numbers. One person in the Ventnor area has had 40 or so separate individuals in his trap over the past month or so. I finally caught up with 3 on the West Wight whilst trapping at Tennyson Down a week or so ago. Since then a number have been spotted on the cliff edge around Compton Bay. 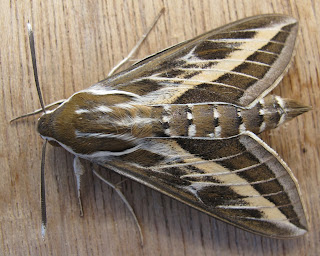 A species we're still hoping to come across on the West Wight is the impressive and aptly-named Striped Hawkmoth. 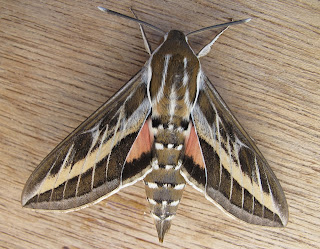 They have turned up in several places in the UK over the past few weeks but this one - caught on Luccombe Down a few days ago - is the first one to be found on the Isle of Wight so far this year. Let's hope it's the first of many! 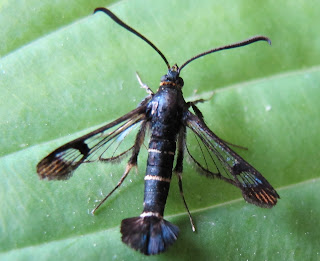 The Clearwings are really special little moths. Having seen a photo of one on a friend's page, I grabbed my Currant Clearwing pheromone out of the freezer and set off down the road to Freshwater allotments. Having gained permission from one of the allotmenteers (?) I stood upwind and attached the net bag containing the pheromone (an impregnated little rubber bung) to a handy cane. Several minutes later the first of 3 males arrived - that's pretty impressive. I've got a whole set of pheromones so I'm hoping to record more species over the next few weeks during their flying season.
Posted by Steve Plummer at 10:53 PM No comments: