Yesterday evening we watched a couple of Red Fox cubs on our front lawn enjoying the peanuts, sultanas and jam sandwiches that we had left out for them. They were followed by a very lively Badger that hoovered up the remains. 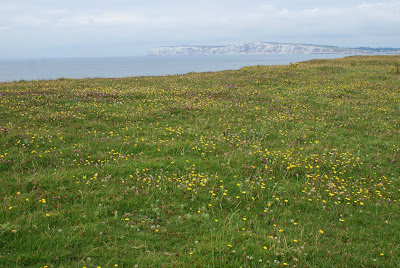 And, then, this morning we went on a walk brilliantly led by Irene looking at some of the plants found along the coastline close to the village of Brook. The photo above gives some idea of the variety of plants that are flowering at the moment. 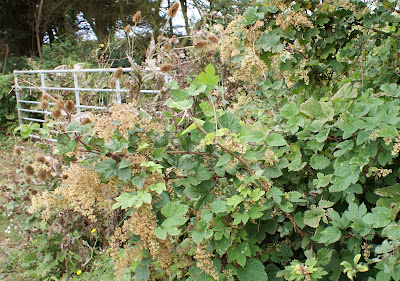 We came across a swathe of Hop plants and I was surprised to learn that the Isle of Wight was the fifth largest producer of hops in the mid-1850s. One reference I came across informs us that, ‘

The Royal Navy who had a huge presence in Portsmouth had a far more liberal attitude to alcohol than these days and needed to make sure that their sailors had enough beer to drink. Although the agricultural land in Hampshire is fine for malting barley its shallow chalky soil is not suitable for hops. The agricultural land on the Isle of Wight, particularly in the Arreton Valley, on the other hand was perfect. Sadly the navy’s disapproval of drunken sailors and the import of cheaper foreign hops made hop production unviable and the practice died out.’ 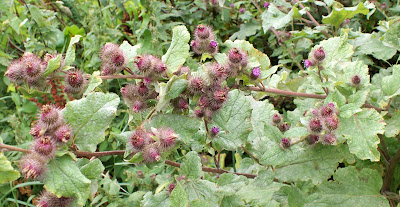 There are a lot of big Burdock plants around at the moment. Irene is from Scotland and delighted in telling us the story of the Burry Man who, about this time each year, makes his way through South Queensferry in Scotland preceded by a boy ringing a bell. 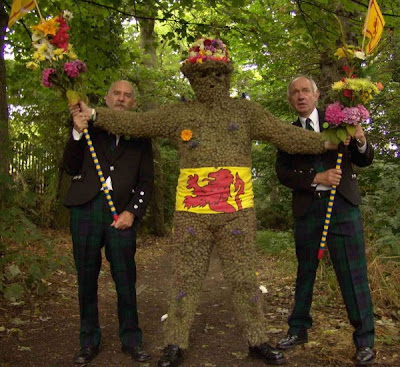 He’s actually covered with thousands of Burdock burrs. The origins of the Burry Man are shrouded in mystery but the tradition nowadays is that he drinks a glass of whiskey with a straw at each of the pubs on his route….and a toilet stop is not an option.

The Edinburgh City Museum writes: “The task of being Burry Man is extremely demanding, requiring stamina, a strong bladder, an indifference to the discomfort caused by more penetrative burrs, and a conviction that this custom should not die out.”

With our Bedfordshire Moth Recorders, Andy & Melissa, encouraging me on Facebook to get the moth trap out, I thought it was about time I gave it a go and so set up the trap in the back garden yesterday evening. There weren't many specimens in the trap this morning, but it did include two Nationally Scarce B moths (recorded from 31-100 of the UKs 10km squares since 1980), though I'm assuming both are pretty common in this area. 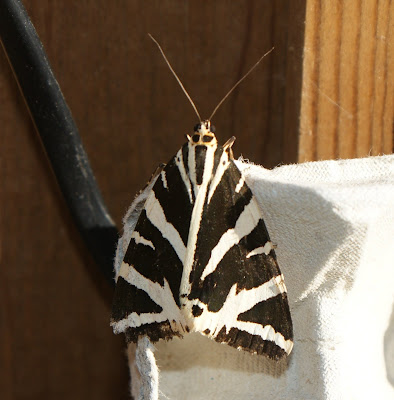 This is the Jersey Tiger (I will endeavour to get a better photo in the future). It looks even more dramatic when it flies with its orange-red underwings. It's the 3rd one I've seen over the last few weeks as it frequently flies during the day and is present on the Golden Ridge Country Park. I've seen them in France before, but it's great to see them in the UK. 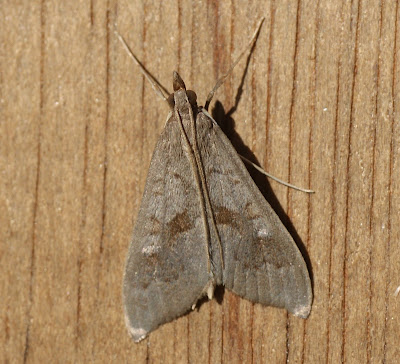 And this is the micro-moth Madder Pearl (Mecyna asinalis), named after its Wild Madder foodplant.

The other species present were 4 Lesser Broad-bordered Yellow Underwings, a Square-spot Rustic, 2 Shuttle-shaped Darts, a Rustic, a beautiful Willow Beauty and this one which, being out of practise, has confused me. It looks like one of the Brocades but I'm hoping Melissa will be able to identify it for me: 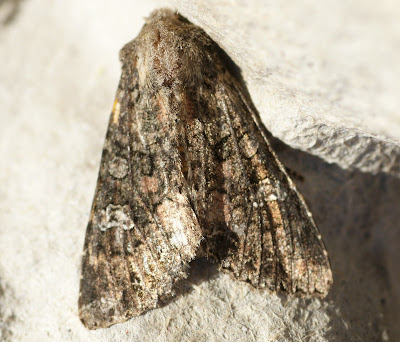 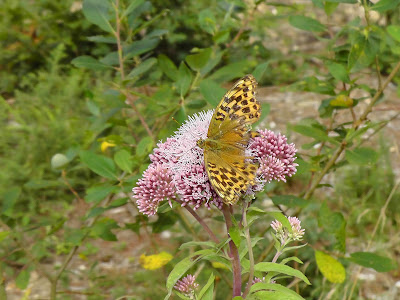 Over the last week we’ve continued unpacking boxes and settling down into our new home. I’ve not had the opportunity to get out much, but today I spent nearly 2 hours wandering around Parkhurst Forest while Carole was in Newport. I didn’t see any Red Squirrels, but I did come across this worn Silver-washed Fritillary in a clearing full of Hemp Agrimony. It was also good for hoverflies, with 15 species, including Xylota tarda, Seromyia silentis & two tiny species: Paragus haemorrhous and the relatively rare southern hoverfly Pelecocera tricincta. 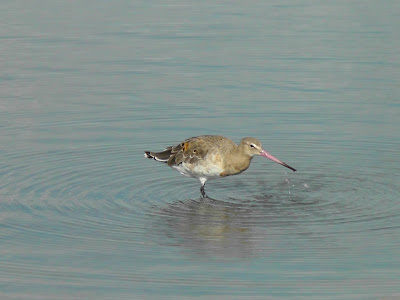 Back in Freshwater, I walked back from The Coop via The Causeway and was surprised to come across a flock of 43 Black-tailed Godwits just over 10m away from the road. I couldn’t believe how close these birds allowed me, several cyclists and a large group of horse riders without taking flight. Indeed they seemed totally at ease in our presence and fed constantly! I tried taking a bit of video footage with the new camera and was pleased with the result (the other 2 photos are taken with the same equipment): 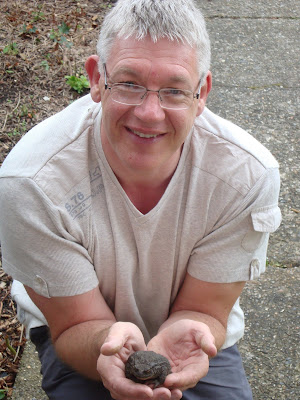 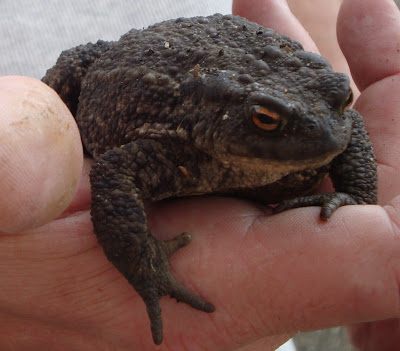 A few days ago we finally arrived at our new home in Freshwater on the far western side of the Isle of Wight. I've already been assured by a number of people that 'the West is best and everyone else can keep the rest'!! Of course, I can't speak from experience, and the last thing I would want to do is upset anyone who is fortunate to live anywhere on this beautiful island, but the West Wight does tend to be less 'touristy' than other areas and there's some beautiful countryside that I'm really looking forward to exploring once we get unpacked and the house is a bit straighter.

The Common Toad pictured above was found under some bramble close to our garage...it's one of the biggest that I've seen for a long time and not a bad specimen for my first Isle of Wight amphibian! 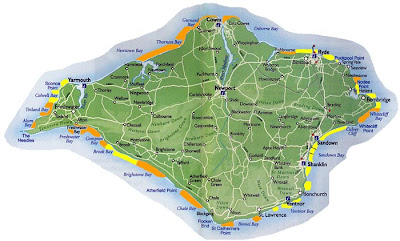 This is a map of the Isle of Wight - if you click on the picture you will get a larger version...and you can see what I mean when I say that Freshwater is in the west! 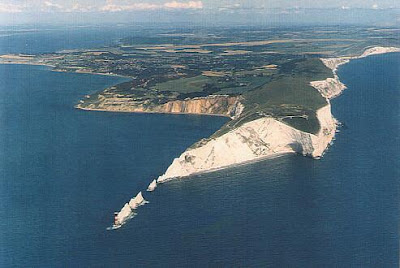 And here is an aerial photo of The Needles which is just down the road from us. Freshwater is a part of the village you can just make out in the distance.

This blog will now become an account of what I begin to find around me, and I'm sure it's going to include many pleasant surprises. I'm told that there are no deer on the Isle of Wight (the New Forest on the other side of the Solent makes up for that!); there are no American Mink...which makes for a flourishing Water Vole population; and, likewise, the absence of Grey Squirrels makes for a thriving population of Red Squirrels!

I have one problem which I'd appreciate help on...what am I going to call this blog now? I was going to call it 'Wight Wild', but there's another website called 'Wight Wild SOS'. I'm a bit stuck so any suggestions will be gratefully received!!
Posted by Steve Plummer at 8:40 AM 5 comments: