Yesterday I decided to leave the Trailcam at a new sett. Entering the woodland I came across several tufts of Red Fox fur caught on the lowest strand of the barbed wire fence: 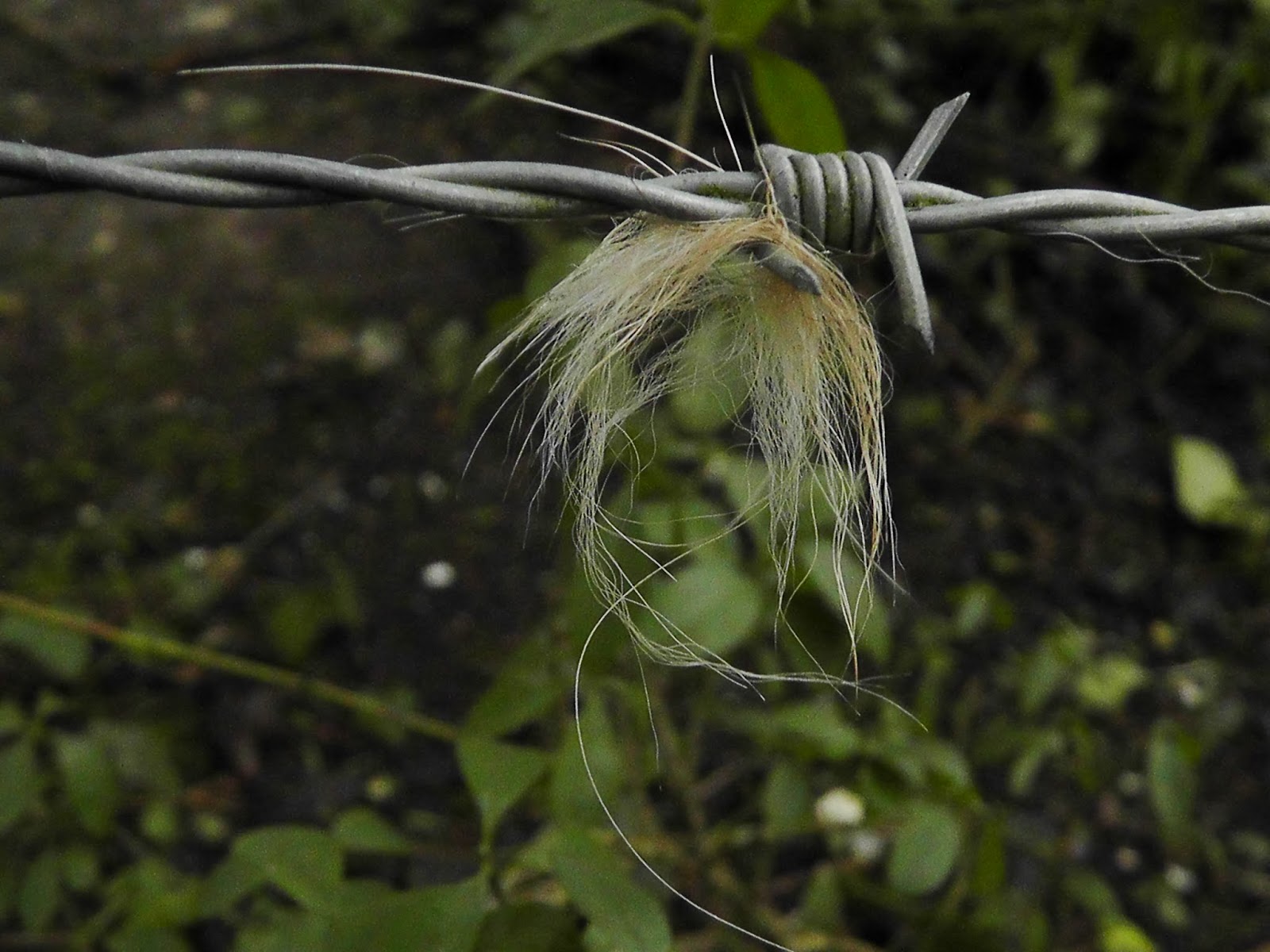 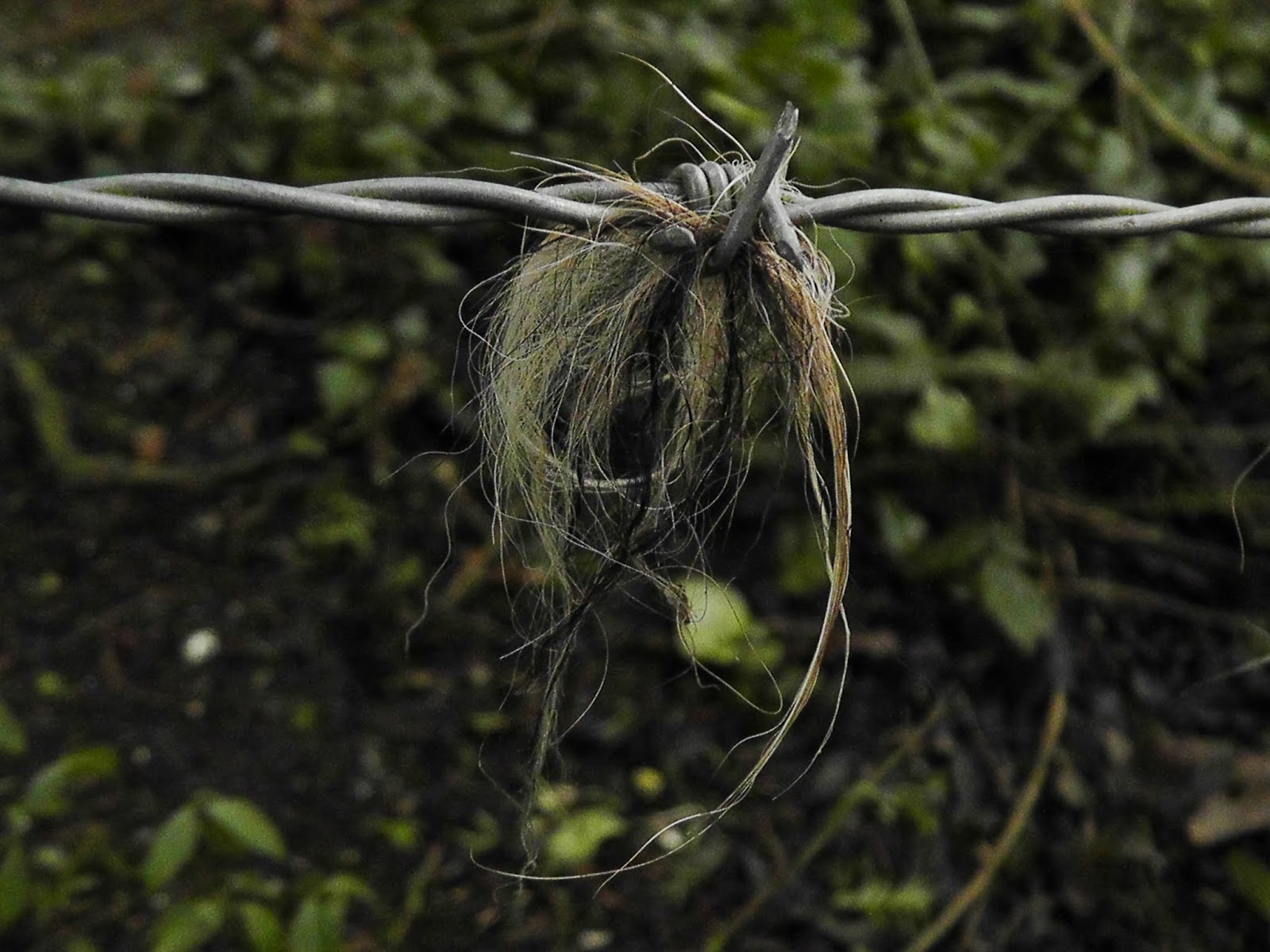 There was no sign of any Badger hair. Further into the wood I came across a sett where there had been a lot of recent digging, resulting in a spoil heap comprising big chunks of chalk. It gives a good indication of the power of the Badgers digging machinery! 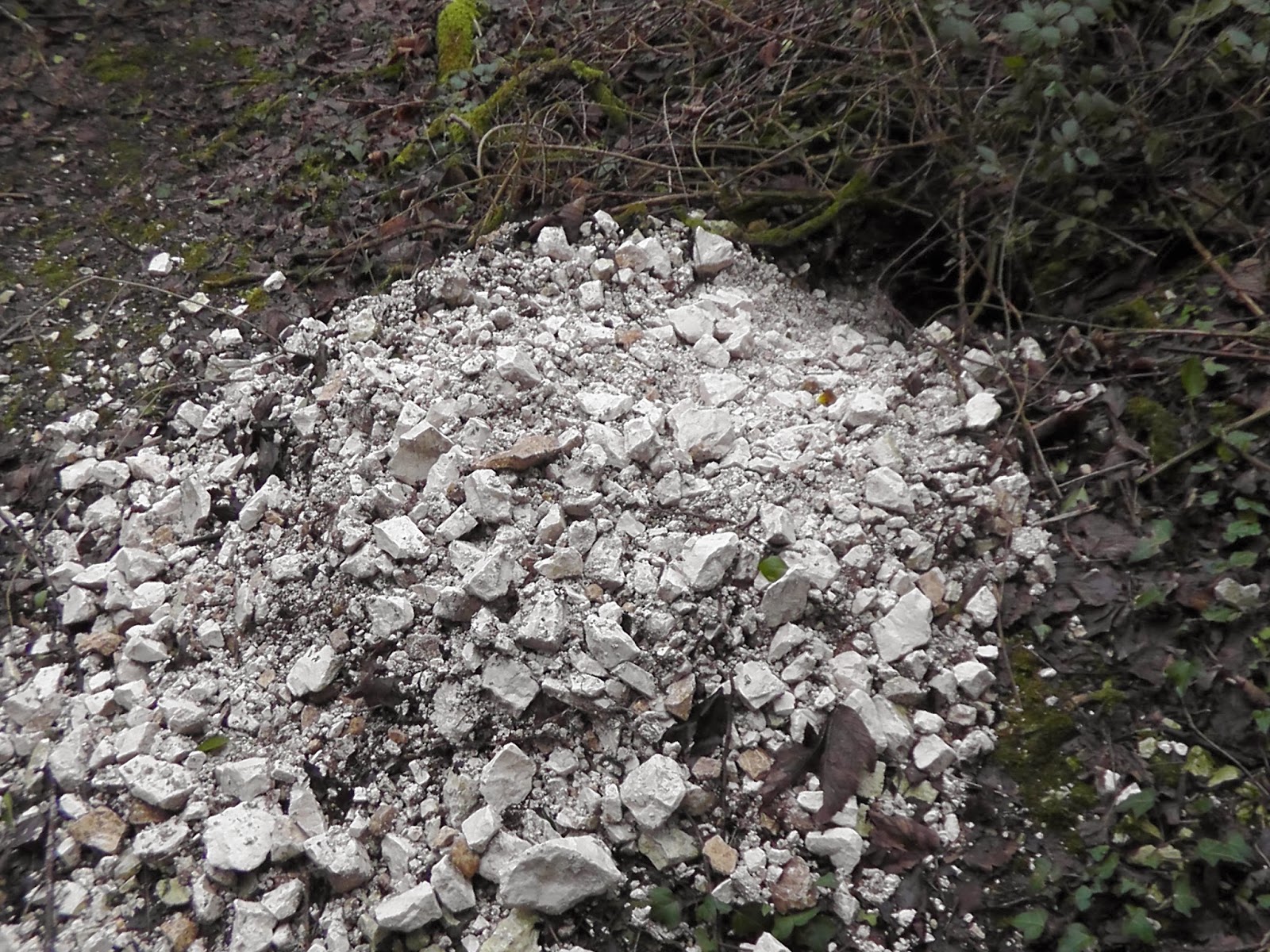 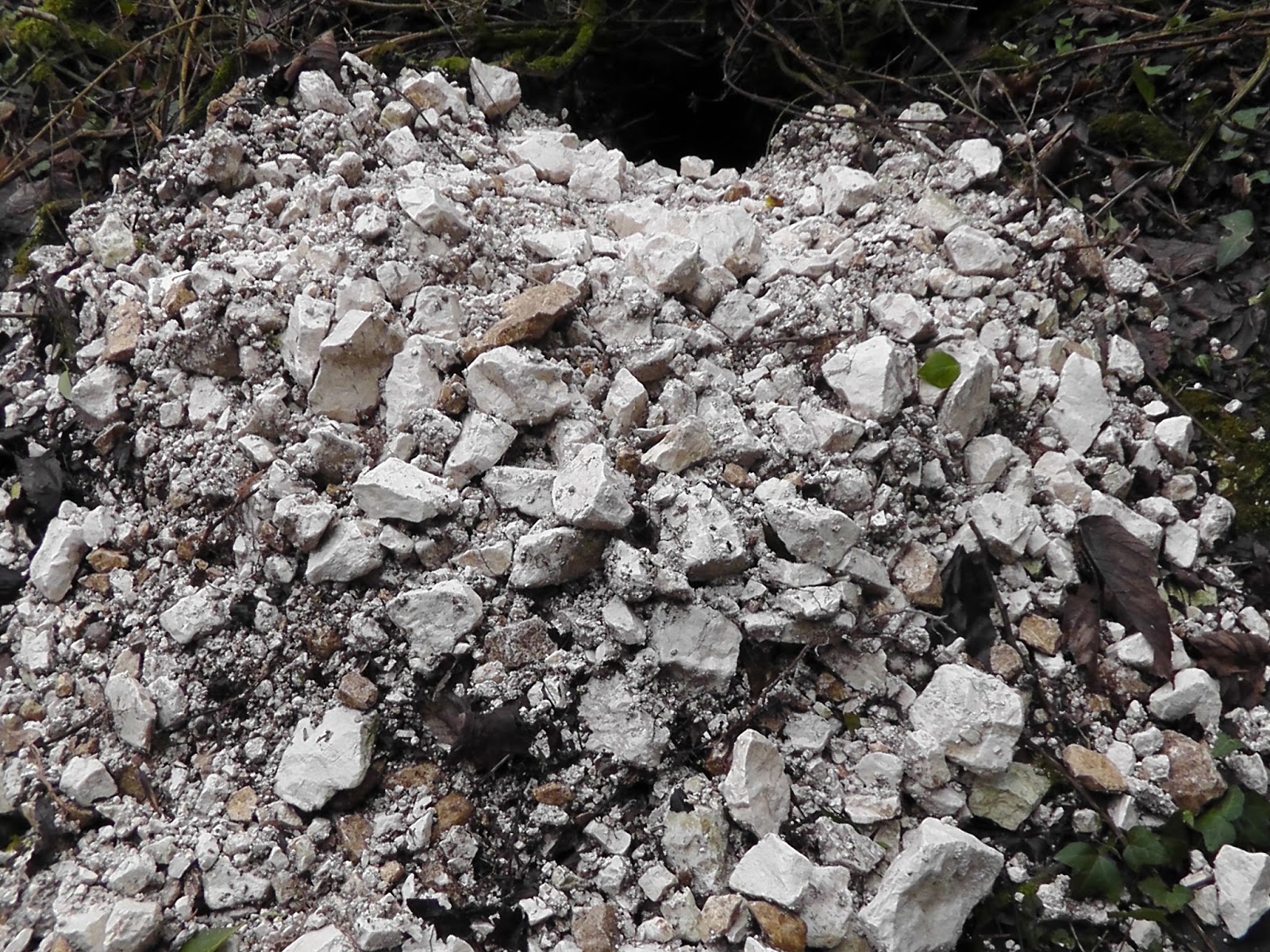 On my way home I paused to wait alongside some scrub nearby and was rewarded with the hoped-for Firecrest.

Returning this morning, the Trailcam footage revealed the presence of a Red Fox with no sign of a Badger which I found quite surprising as the weather during the evening was fairly mild. The Fox has a very distinct scar-line across the back of the neck, so I will be looking out for 'Scarneck' over the coming months!

Yesterday evening I left the Trailcam attached to Patricia's fence overlooking the road in front of her home where she regularly feeds the local Foxes & Badgers. Unfortunately, we didn't manage to get the Stoat-like animal which was spotted briefly a few evenings ago, but there was plenty of activity:


By looking closely at the structures of the Foxes tails it can be established that there were 3 present on and off throughout the evening. 'Bushy-tail' and 'Notch-tail' spent quite a bit of time feeding together with 'Ragged-tail' eating separately, the other two probably being dominant. At one point 'Ragged-tail' is seen off by one of the Badgers, though 'Notch-tail' in the next clip seems quite comfortable feeding alongside Brock! The sequence ends with 2 Badgers feeding together.
Posted by Steve Plummer at 9:52 PM No comments:

I was standing on the roof of Fort Victoria this morning, enjoying the sunshine, when a large pale gull suddenly flew past and landed next to one of the benches right in front of me...an adult Glaucous Gull....cue excitement! A short while later it flew down onto the shore where it pecked at a dead fish....when I made my way to the beach a few minutes later it was quite confident and even sat down and made itself comfortable for a while before being disturbed by walkers and, eventually, flying off in the direction of Norton Spit. Back in Bedfordshire I only saw these birds distantly, sitting on the water in the evening roost at Stewartby or Brogborough Lake. To have one almost within spitting distance was something special! Here's a bit of video:


On Tuesday morning I was present again on the roof of the Fort, enjoying the sunshine. I wondered if the Glaucous Gull was still around as I panned across the beautiful view. Then I looked down to find the Gull walking along the grass in front of the church - wow! It allowed for an even better bit of video:

Surprisingly, Tawny Owls are very few and far-between on the Isle of Wight, but Little Owls, Barn Owls, Short-eared Owls (in the winter) and Long-eared Owls are all fairly common. I'd forgotten about this bit of video footage of a Long-eared Owl I came across early last year....they really are stunning creatures!

I was really pleased with my first local Badger Trailcam footage of 2014 with 4 individuals enjoying the nuts that I put out for them. I think that the large individual - who's obviously in charge - is a male. The footage also includes an inquisitive Brown Rat and, as light breaks, a Tabby Cat.

Posted by Steve Plummer at 1:18 PM No comments:

1st January
Birders look forward to the first day of a new year with the opportunity to begin a new list of birds seen.....unfortunately the weather today was a stinker with gale force winds & heavy rain. My first bird of the year was a Black-headed Gull which I watched from the bedroom window following a lie-in! In the afternoon I wrapped up warm and ventured out. A Barn Owl was my second bird of the year, one of the local pair keeping dry inside their nesting box, and a couple of Gannets were spotted from Fort Victoria. 51 Canada Geese were in the cattle field on the other side of the Wilmingham Road from Rofford Marsh, and 46 Dunlin were feeding on Yarmouth Mill Basin. 26 species in all, so not a total washout!

2nd January
Blue skies & sunshine - wow! The highlight today was a period of time working at the Fort Victoria Viewpoint where some sea-watching produced a Red-throated Diver on the water, lots of Guillemot activity, a smart male Common Scoter, and a number of Mediterranean Gulls. A Shag with the most pronounced headcrest I've seen on one of these birds, yet, flew in to fish directly below the viewpoint, and a Peregrine Falcon flew low across the water from the mainland. At Yarmouth Marina there was a flock of 20 Turnstone, 9 Ringed Plover and a single Dunlin. The Hen Harrier was seen quartering over Rofford Marsh and, later, seen from the Freshwater Causeway dropping down into the reeds to roost. What a difference a day makes!

3rd January
A quick visit to the Fort Vic Viewpoint late afternoon paid dividends with my first IOW Kittiwakes - an adult and a 1st winter were battling south against the strong winds. A Guillemot was braving the waves and some 800 Black-headed Gulls flew past during the short time I was there. There were some pretty dramatic downpours of hail and gusts of wind! I didn't drive down Freshwater Causeway today...but I might have struggled as Mark Cooper's photo on the County Press website shows: 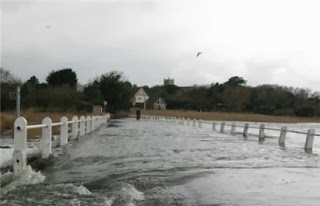 4th January
"Teacher Teacher" - it was great to hear a Great Tit singing its spring song, but I fear Spring is some way off yet! I arrived at Fort Victoria and scanned the shore in front of the fort to find an adult Gannet sitting on the water, together with a few Guillemots and my first Razorbill of the year.  A juvenile Kittiwake flew down the channel. It was 'blowing a hooley' at the Viewpoint and a Kestrel shot overhead with the wind behind it. 2 male Eider and, later, 2 males and 3 females flew past with a Red-throated Diver in the distance. The Eider Ducks were new for the year, and these were followed by a new IOW species for me in the form of a superb Black-throated Diver. At the Scrape I was entertained by the female Hen Harrier which flew up and down the hedgerow for 15 minutes or so giving some amazing views. As dusk fell I relaxed by the bridge alongside Rofford Marsh enjoying the ambience. 2 Water Rails were calling, one crossing the channel close to where I was standing, and a Cetti's Warbler made my ear-drums ring as it loudly burst into song right next to me!

5th January
Continuing gale force winds and rain which limited the birding somewhat. There was a small charm of 5 Goldfinches at the Fort Vic Viewpoint but a mist rolling in meant that very little could be seen on the sea.

6th January
My first Red-breasted Merganser of the year with a female viewed from the Fort Victoria Viewpoint. the other highlight was the 13 Red-throated Divers that flew by, one of them dropping in right at the front of the Viewpoint to fish. Lots of Kittiwakes, Mediterranean Gulls and various Auks including at least 2 Razorbills.

8th January
At the Fort Victoria Viewpoint I was reflecting on just how dramatic male Eider Ducks look when flying past when I noticed a large bird of prey hugging the sea surface as it flew across the Solent before landing on the Hurst Castle Spit. It was a male Marsh Harrier - totally unexpected, but very much appreciated!

9th January
I was really pleased with the 4 local Badgers caught on the Trailcam yesterday evening (see above), and I finally caught up with my first Pintail of the year: a resplendent male at the Mill Copse Scrape.

10th January
Only opportunity for a quick cycle to the Fort Vic Viewpoint at Lunch, but it resulted in a new species for the year: 2 Lesser Black-backed Gulls, and a new species for the site: a single Canada Goose that surprised me bobbing up and down in the middle of the Solent. The Trailcam was set up in a hedgerow at Golden Hill CP last night - a Bank Vole walked past early on, but the footage was dominated by some lively Wood Mice, 4 being the highest count in shot at any one time.