Late yesterday afternoon, Robin Boot and I had a wander around Duck End Nature Reserve to see what was around. Here are a few of Robin's photos.... 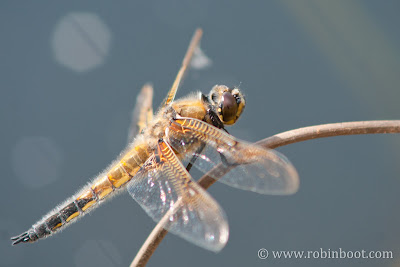 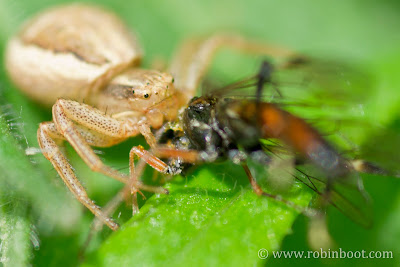 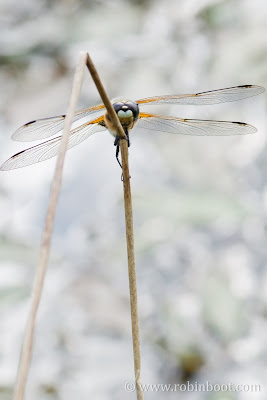 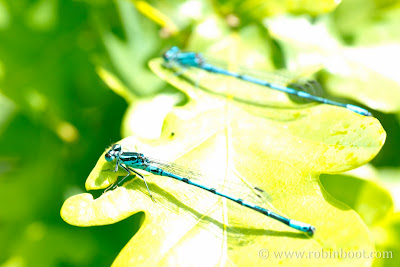 Posted by Steve Plummer at 8:47 AM No comments:

Carole and I will be moving to Freshwater on the western side of the Isle of Wight in August. With the island famously hosting at least 14 species of Britain’s bats I’m determined to hone my bat detector and identification skills over these intervening months. Last night, I joined four other members of the Bedfordshire Bat Group in a woodland survey which included the erection of two mist nets.

Even before we caught anything, the detectors revealed a good range of species. The Soprano Pipistrelles were the first bats on the wing, and we were able to watch them hawking down the rides. Over the next hour or so we picked up Brown Long-eared, Common Pipistrelle, a Noctule flying over the wood and a probable Brandt’s Bat flying past us. Bob also thought that he may have picked up a distant Barbastelle.

It was an hour or so later that the first of three bats flew into the mist net stretched across the woodland ride. 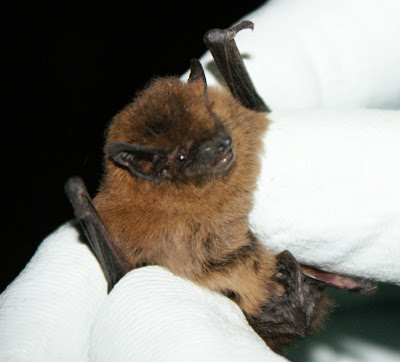 It’s a male Common Pipistrelle with its dark bandit-mask face. Blowing on the dorsal fur also revealed the dark base to the fur.

On this photo you can just make out the flap of skin behind the calcar (the strip of cartilage running from the inner side of the ankle), called the post-calcarial lobe. It’s a feature that is not present in the Myotis group of bats – Natterer’s, Daubenton’s, Whiskered & Brandt’s, one of which turned up in the net a short while later: 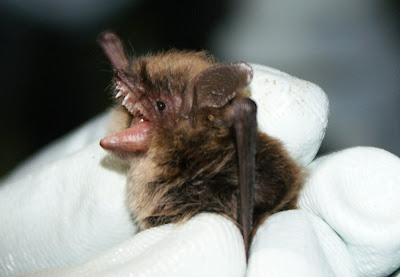 The features pointed straightaway to a female Brandt’s or Whiskered Bat. The way in which it ‘gaped’ is also a common feature of these species. But, in the end, it wasn’t possible to narrow it down more than that. In fact, one person has said that if you get a number of the characteristic features for each of these species in one individual, then you would be correct in your identification 95% of the time. It’s only possible to be 100% sure through DNA analysis! My photo is quite poor, but a better photo showing the upper jaw dentition revealed that the feature called the protocone on premolar 4 is longer than the small premolar 3, an indication pointing towards Brandt’s rather than Whiskered. The heart-shaped nose is a good indicator, too, but we're erring on the side of caution and putting this one down as Brandt's/Whiskered! 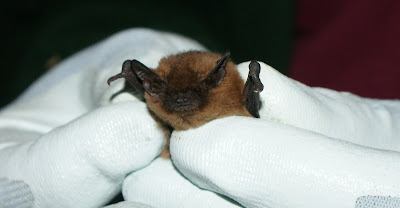 A short while before calling it a night we found this bat in the net. It was very lively female and several features indicated that it might well be a Soprano rather than a Common Pipistrelle. It wasn’t obviously one or the other and the only way we were going to confirm it was by listening to its echolocation calls as it flew out of the hand….it turned out to be another Common Pipistrelle!

On the way home we added to our evening’s list of mammals with Red Fox, Chinese Water Deer and Rabbit. I can’t tell you how much I enjoy these special evenings!
Posted by Steve Plummer at 12:44 PM 2 comments: