We were back in Bedfordshire to celebrate New Year and so I took the opportunity on a mild New Year’s Day to get out and about, my main priority being to catch up with some deer. The Isle of Wight has a wealth of wildlife, but wild deer are conspicuous by their absence, though the odd Fallow Deer is reckoned by some to swim across the Solent and visit from time to time.
I caught up with a pair of fleeing Muntjac and another distant male Muntjac at Kingshoe Plantation, but the best sighting of the day was a group of 8 Chinese Water Deer in a field alongside Flying Horse Farm, just east of Ridgemont. The video’s not great, but it does vividly illustrate the amount of hormones there are around at this time of year! 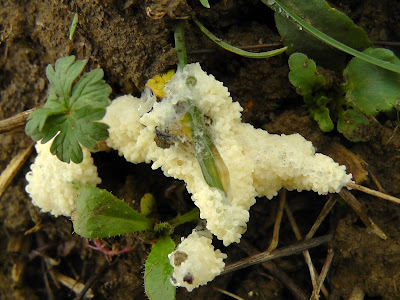 With just under an hour to spare before meeting up with the family for dinner, I decided to try one of my favourite spots for Brown Hare. Unfortunately, I drew a blank, but did come across this slime mould, which I think is Mucilago crustacea, delightfully referred to in some places as Dog Sick/Vomit Slime Mould! Slime moulds are fascinating things. This is what the Royal Horticultural Society says about them:

‘Slime moulds do not attack plants, but obtain their food by engulfing bacteria, fungal spores and other tiny pieces of organic material as they move. Some slime moulds spend most of their life as single-celled, amoeba-like structures, invisible to the naked eye. Others form a larger structure called a plasmodium. The plasmodium constantly changes its shape as it creeps along, and is sometimes seen as a white or yellow (but sometimes other colours) slimy ‘sheet’, or a network of strands, on the soil, grass or stems and lower branches of plants.

Slime moulds are triggered into spore production by environmental conditions. Depletion of nutrients is a common trigger. The spore-producing structures may develop throughout the year, but are found most commonly in late summer and autumn. The spores of many slime moulds are extremely resilient and can survive for many years before germinating.’
Posted by Steve Plummer at 12:10 PM No comments: