Why do Badgers groom so much?

Yesterday evening's trailcam footage from Sett C revealed the usual amount of Badger grooming, which never ceases to fascinate me. But why do they spend so much time scratching and grooming? Here's one of last night's individuals self-grooming...this one seems to love spending time stretched out on its back!


Most, probably all Badgers, do suffer from Fleas, Ticks and Lice. In fact, the Badger Flea (Paraceras melis) has the distinction of being the biggest Flea that's yet been discovered! But, providing the Badger is relatively healthy, it certainly won't be infested with parasites. In the New Naturalist book, Badger, Timothy Roper shares the results of his study into ectoparasite infestation in Badgers giving an average number of 3 Fleas, 11.9 Lice and 6.3 Ticks per Badger. If it wasn't for regular grooming the results would obviously be a lot higher, as noted in Badgers suffering from disease and starvation.

The trailcam footage from the last few days confirms the fact that self-grooming deals with quite a bit of the body, but mutual or allo-grooming helps to reach those parts that cannot otherwise be reached easily. Here's another sequence from yesterday evening showing a bout of mutual grooming...

....and ending with a brief mating attempt (there was no evidence of further mating activity on the next video sequence which would have been 30 seconds later!).
Posted by Steve Plummer at 10:21 AM 1 comment:

Below is a bit more of the interaction the Trailcam picked up outside the sett on Monday evening.

The first sequence shows an interesting bit of heirarchy. A Red Fox joins a feeding Badger and is soon shown who is 'top dog'! There follows a sequence with two Red Foxes where one is obviously more dominant. A Red Fox then feeds but soon disappears when it realises a Badger is on the way home!


In the next sequence, 2 Badgers - I reckon they might be last year's cubs - engage in what looks like an aggressive encounter but, a few moments later, they are involved in mutual grooming before the one disappears out of shot and the other chills out!

Posted by Steve Plummer at 1:13 PM No comments: 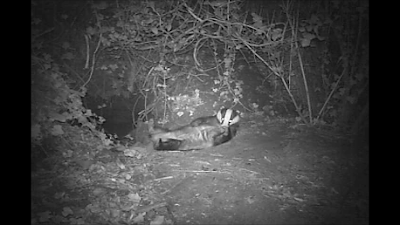 Yesterday evening I put the Trailcam out at a local Badger sett for the first time this year. There was some fascinating footage, but the best of the lot was the grooming sequence below. The Badger spends most of the time on its back, giving some delightful footage. Look out for it sneezing three times, too!

Tied up in Knots! 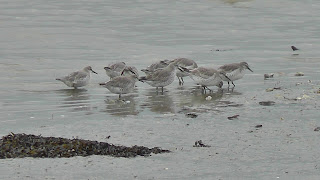 At Newtown Nature Reserve it's possible to count close on a thousand Knot feeding together. Here, just a few miles to the west, these ten constitute the largest gathering that I've come across so far! And I thought that 'Tied up in Knots' was an appropriate title for this post because I've never witnessed any other waders huddling together as closely as this as they slowly make their way up the shoreline! Soon much of their grey plumage will turn a beautiful deep red colour, which is why their full name is Red Knot nowadays.

Like the Dunlin these birds have travelled a long way to spend the winter on our shores - from Scandinavia and as far west as Siberia. 10 birds are not going to give me one of nature's most famous wildlife spectaculars as massive flocks of these birds bank and wheel together over other estuaries on the mainland, but just watching this small flock was reward enough for venturing out in freezing temperatures!

Another Blackcap flies in! 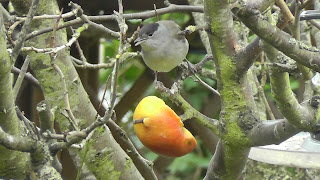 In a recent post I noted - with more than a hint of jealousy - the various birds that visit Caroline's garden just across the road from where I live here in Freshwater.

My interest was particularly piqued by the two wintering female Blackcaps that she has been able to watch feeding from the kitchen window. Well, now a male has arrived, too, and earlier today I was able to film him. He really is a neat bird!

Yesterday, the Eggheads were asked what a Turnstone was (they correctly answered "A bird!"). Today, on Pointless, if either of the finalists had recognised the photo of a Wigeon, they would have got the lowest-scoring 6-letter bird (they didn't!).

First thing yesterday morning the light on the pool in front of Yarmouth Mill was wonderful, and highlighted a number of different bird species that were feeding in the north-eastern corner. On the video below are Turnstone (watch it flick over a relatively large rock as if it was a tiny stone!), several Wigeon (they're the beautifully plumaged ducks!), Ringed Plover (the first species) and Chaffinch...


Just 50 metres away was this small group of Dunlin feeding in the shallows:


The British Trust for Ornithology website informs us that: 'Three races occur in Britain, one of which schinzii breed here, but winter in west Africa; alpina birds from western Siberia winter here, whilst small numbers of Greenland breeders (arctica) pass through in the autumn', which means that these birds will start heading north-west towards Siberia soon....amazing or what!!
Posted by Steve Plummer at 9:53 PM 3 comments:

The bold & the beautiful! 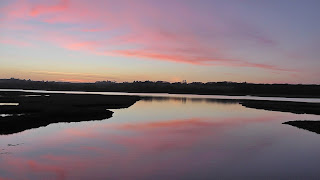 A small group of us have been meeting regularly at dusk to watch the Barn Owl that appears at dusk, often spending time hunting around the Mill Copse Scrape. 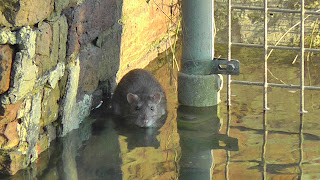 Late Monday afternoon, Roger and I came across a bold Brown Rat by the old Yarmouth Station.


The Barn Owl didn't disappoint....and neither did the sunset, which was stunning as you can see from the following video sequence:

We're back on the mainland for the weekend and so I took the opportunity this morning to see how Bedfordshire's Chinese Water Deer are doing. There is no better place in the UK for seeing these fascinating creatures than in the arable fields on the Greensand Ridge. Here's a video sequence showing just a few of the 34 Deer that I counted in a relatively small area: