2013 has been another fascinating year when it comes to the wildlife I've been fortunate to see & experience. Here are just a few of the highlights:

I managed to see 87 species of Hoverfly this year... 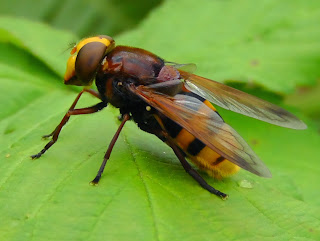 The impressive Volucella zonaria turns up regularly but I know that there are many more special species still out there...Adam Wright has discovered a new UK species on the island each of the last 2 years! After liasing with Roger Morris of the Hoverfly Recording Scheme, I set up a UK Hoverflies Facebook Group which, as I write, has nearly 270 members. It's wonderful to see so many people being encouraged to start a new interest or step up a level as a result and I can't wait to see how the group develops in 2014!

The summer-plumaged Wilson's Phalarope which turned up in June, resulting in my first big patch Twitch. I was on holiday in the Pyrenees when it was found but managed to see it on the last day before it disappeared after returning home a day early because of the floods (it made up for the Wallcreeper that I may well have seen otherwise)!

I think this year has been the year when my interest in moths really took off after building up for several years. I ended up running the trap just about every evening during the summer (much to Carole's disgust as the bedroom list seemed to grow at an exponential rate!). Who would have thought that my little featureless back garden would turn up these two beauties: 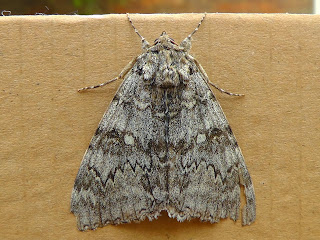 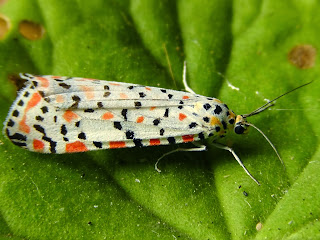 ...and a small but beautiful Crimson Speckled all the way from Southern Europe/North Africa (admittedly this first turned up in Caroline's garden across the road but I honestly didn't put it in my moth trap in the morning!! I only wish that the new species of Ant Lion that turned up in Dave's Freshwater trap had visited mine, too). 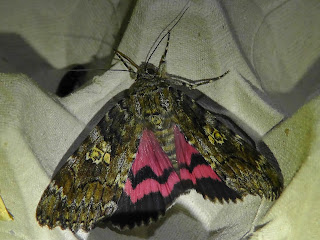 But the biggest excitement was the discovery of this Dark Crimson Underwing in an Isle of Wight wood...found by James, Iain, Caroline and myself in the last trap to be dismantled in the early hours of a summer's night! This almost certainly means that we've found a second breeding colony outside of the New Forest, though we'll have to do our best to confirm this in 2014. I was also present when Walter's Copse turned up a new species for the island: a White Colon.

My plant interests have been concentrated in the small graveyard at Colwell Baptist Church where we allowed this patch of the old Colwell Common to flourish for the first time in many years. 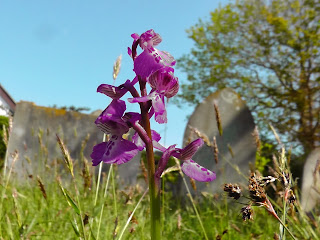 The result was an amazing 130 species, including several Green-winged Orchids. I'm in charge of managing this plot and I'm going to really enjoy seeing what turns up in 2014. 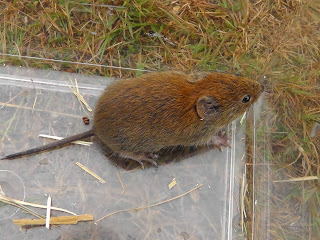 The result was 100% catch rate with 2 separate species: a lively Wood Mouse and a gentle Bank Vole which thrilled the children!

And my favourite bit of Trailcam footage during the year?

So what about 2014? Continuing on the small mammal theme, I'd like to finally get confirmed footage of the local Harvest Mice. 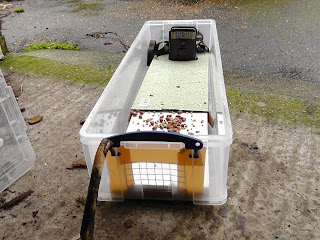 This is the set-up I devised earlier in the year for my Harvest Mouse quest....I'm trying to think of what I can do for Mk II but I'll keep soldiering on with Mk 1 for now!

Now that there is new effective live trap on the market that doesn't mean taking out a mortgage to buy a set, I shall also be engaging in more small mammal trapping!

In 2014 I will continue to look out for a visiting Otter, too, and maybe catch up with some of the Deer that Tim commented on a few days ago.

I shall continue to develop my environmental links with the local schools and also have the opportunity to lead some birding walks along the estuary which I will follow up.

I've no doubt the moth-trapping will go from strength to strength, particularly following the offer of a generator from James.....maybe this year will be the year when we refind the famous Isle of Wight Wave, an adventure that began on the Tennyson Down cliffs last summer.

And because I'm going to be out at night a lot once more, I also intend to spend more time using the Bat Box to record what's around and try my best to crack the sound analysis software!

I could go on, but I need to sign off and enjoy the rest of New Year's Eve with Carole, my long-suffering wife!

2014 is going to be a great year...I'm already feeling excited like a small child!

Last night I placed the Trailcam in the copse at the bottom of the garden of the home in Ampthill, Bedfordshire, where we are spending our Christmas break. The Red Fox that paid a visit looks to be in tip-top condition:

Posted by Steve Plummer at 11:35 AM No comments:

I seem to have got caught up with the various Facebook Groups that I'm a part of over the last few months to the detriment of this Blog. But the big advantage of a resource like this over Facebook is that it really achieves the sense of a journal, for my own benefit even if no one else reads it. For that reason I'm going to have another go at being faithful to the blog over the coming 12 months. Over the next few days I'm hoping to put together a post with some of my 2013 highlights. In the meantime here is a video of 2 species of deer seen today in Bedfordshire. With the Isle of Wight being deer-less, I'm always looking out for deer whenever we're visiting family on 'North Island'!

The footage begins with a Chinese Water Deer feeding in a field (1 of 8 seen this morning), which is followed by a Muntjac spotted at the bottom of the garden at the house in Ampthill where we are spending Christmas: