Chinese Water Deer are beginning to be noticeable in the local fields again. I saw five from the car in the Ridgmont area this morning. Just south of Lower End I searched an area of rough grass where this species often settles down for the day, and disturbed two individuals, including this one, which I managed to get a brief shot of as it bounded into the hedge!

I released the Harvest Mouse back over Flitton Moor some time ago, now, but I really enjoyed the period that it spent as my guest in the study and felt that I really began to understand something of it's lifestyle & habits. Next year I'm determined to learn more about this fascinating creature!
Posted by Steve Plummer at 11:11 PM No comments:

Here’s a more in-depth report of this morning’s excitement! 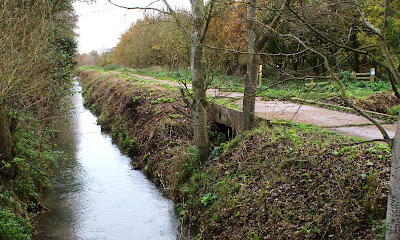 This photograph shows the River Flit close to the village of Flitton. It is under the bridge that you can just make out on the right that the Otter paw-prints and spraint were found a few weeks ago. The main expanse of Flitton Moor is located the far side of the copse on the right, and behind the camera. Between the copse and the path is a water-filled ditch, and it is here that I found one of the Harvest Mouse nests (See here).

Between Thursday and today, I’ve had 8 Longworth small mammal traps set along a 30m stretch of this ditch bank, beginning just after the end of the copse in an effort to find my first ever wild Harvest Mouse.

In that time, incorporating 5 box-checks, I have trapped 19 Bank Voles and 4 Common Shrews (some of the Bank Voles, particularly, were probably ‘trap-happy’ and entered the traps several times!). As I approached the last trap this morning, set in the midst of a bramble bush, I was beginning to think that Harvest Mouse was going to elude me this year. So I was delighted when I emptied it to find a surprised-looking Harvest Mouse exploring the depths of the plastic bag!

So, here she is again – at least, I’m calling her a ‘she’ though it could as easily be a male. It’s thought that our UK Harvest Mice are slowly declining – it’s certainly been harder to find them in Bedfordshire in recent years, though that is probably due at least in part to a lack of people searching for them – a 1972 nest survey here revealed them to be fairly widespread. They’re certainly tiny, weighing only 5-11 grams!

When I’ve had the opportunity during the day I’ve been transfixed as I’ve watched this winsome creature creeping through the grass, or else clambering among the hogweed stems, sometimes gripping them with her prehensile tail as she stretches out to sniff the Bertolli tub! I’ve watched her wash, lap water from a bottle top, nibble grains held between his paws, and spend quite some time simply staring back at me from the other side of the glass! The Bertolli margarine tub contains the Harvest Mouse nest that I found on Flitton Moor a few weeks ago (see above). I fashioned an entrance with my penknife and she’s readily taken to it, and is tucked away safely as I write – of course, it could even be the nest where she was raised!
Posted by Steve Plummer at 10:54 PM No comments:

I've only got time for a brief note here, but I was really excited this morning when emptying the 8th and final trap to find a delightful Harvest Mouse running around in the bottom of my little aquarium, my first in the wild...just as I was beginning to give up hope of ever finding one! I'll write a bit more later, but I've got it here at home for a little while, and it's happily eating the meadowsweet seeds and pieces of grain provided. Wonderful!
Posted by Steve Plummer at 12:46 PM 2 comments:

This Bank Vole is one of 6 that were present in 8 traps on a 30m stretch of ditch parallel to the River Flit. There was also a Common Shrew in one of the other traps, a pretty good trapping rate! 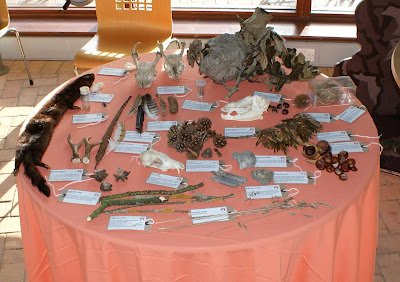 I spent the morning in the Marston Vale Country Park Centre displaying our BNHS ‘Bring Back The Nature Table’ exhibit during an environmental education event attended by a number of Bedfordshire schools. Schools are able to ‘book’ this nature table for a few weeks. After an initial assembly, or other time demonstrating the table to the children, we leave it with them. The idea is that it will help to inspire the children to begin to bring together their own nature table. The mink stole on the left hand side of the display was the real hit – the children loved stroking it and putting it around their necks, and I was able to relate the story of the American Mink in the British countryside. 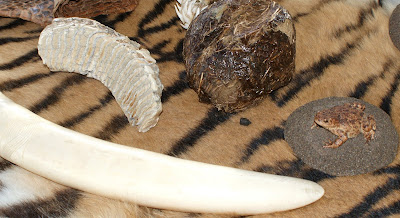 The Education team from Whipsnade Zoo were a few tables away. I put one of my Fallow Deer droppings alongside their Elephant dropping…it's the little black dot to the right!! Although they had a Tiger skin, Tiger skull, stuffed Penguin and ivory tusk, Jackie & Hannah, their Education Officers, kept popping along and exploring our nature table. In fact, I think that it was a real hit all round, one teacher excitedly exclaiming that it covered the whole of their curriculum! I’m really looking forward to us getting it into the schools and developing this simple concept.
Posted by Steve Plummer at 6:25 PM No comments:

Dave Parsons recently found a Yellow-necked Mouse next to the freezer in his garage. He has also trapped House Mouse and Wood Mouse over the year. Still not having seen Yellow-necked Mouse in 2010, I set up a number of Longworth traps in various places, and have since been waiting in hope. 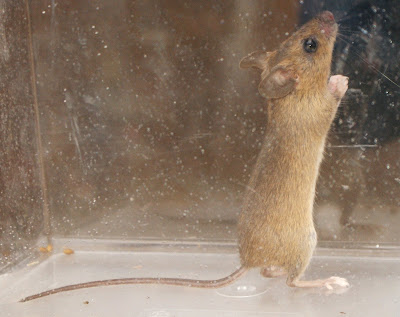 Nothing yesterday but, this morning, Dave rang to say that the doors on two of the traps in his garage roof-space were shut. The first trap revealed this individual. Yellow-necked Mice are bigger than the more common Wood Mouse, and share several distinctive features. The relatively large ears and eyes look good for Yellow-necked.

And the dark ‘stripe’ on the dorsal area, extending between the ears and onto the face, looks good too. 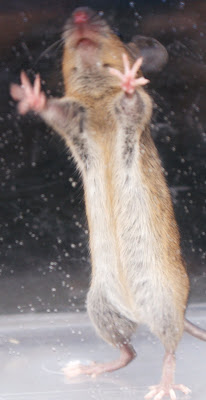 But this is the clincher. A terrible photo, but one that clearly shows the ginger ‘collar’ which gives the Yellow-necked Mouse its name. This is the best photo of the underside that I could get due to the frenzied ‘bouncing’ around of this Tigger-like rodent….another Yellow-necked Mouse trait!

Unfortunately, the Mouse in the other trap escaped, but I'm convinced that it turned around and smirked at me before disappearing behind a gap...that's one trait the guides don't mention!
Posted by Steve Plummer at 5:43 PM No comments:

Readers of this blog will know that I constructed an ‘uber-Hedgehog table’ in our back garden earlier in the year. Unfortunately, there was never any evidence that it was used, and I felt just a little hard-done-by when our next-door neighbour recently informed us that she had found a Hedgehog under some leaves on the other side of our fence!

After lunch today, Carole and I spent an hour or so in the back garden picking up the leaves that had fallen. If you look on the left-hand-side of this photograph, you will see a pile of leaves that I have deliberately built up.

That is because I discovered this Hedgehog nest as I cleared the leaves away. It’s a fairly substantial pile of stems and leaves and it was pretty obvious that it was the winter hibernaculum where the occupant would spend the next five or six months in a deep sleep. 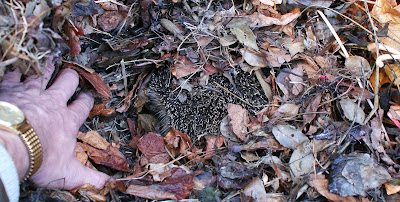 I carefully peeled the outer layers away, and could feel the heat even before revealing this good-sized individual. It moved a little which, together with the heat, suggests that it is still fairly active, but it won’t be long before its body temperature drops to the rate of its surroundings, 4 degrees C being the ideal. At that temperature, its heart beat will slow from about 147 beats per minute to an amazing 2-12 beats per minute. I didn’t want to disturb it any more and so quickly replaced the vegetation.
Posted by Steve Plummer at 6:03 PM No comments: