Earlier this year I shared about how I had enjoyed Philippa Forrester's book, The River. Yesterday evening, I watched the latest instalment of Halcyon River Diaries charting the ongoing story of the family's life interacting with the wildlife living on the river. The fact that Philippa is married to a top BBC wildlife cameraman makes for some incredible images and stories, including catching up with the local Kingfishers, Dippers & Otters.

There are another 11 days during which you can catch up with the programme on the BBC iPlayer at http://www.bbc.co.uk/programmes/b00x3s5r

Towards the end of the programme there is a really dramatic scene. Discovering a young American Mink setting up territory on their stretch of the river they reluctantly set up a Mink trap. Eventually they check the trap one morning to find the Mink inside. Now that it's been trapped there's only one course of action - it has to be dispatched, much to the distress of both Philippa & husband, Charlie, who has to shoot it. It's well worth following this part of the story which begins at about 44 minutes into the programme. Continue watching for some great shots of the Water Voles living in the town of Cheddar, a sight which helps the family to come to terms with the action they had to take earlier.
Posted by Steve Plummer at 1:36 PM No comments:

One of the advantages of my love for our British wildlife is the fact that my family never gets stuck when it comes to choosing Christmas gifts. As I excitedly opened my presents on Christmas Day the pile of books around my feet grew and grew. My Amazon Wish-list had been used to great effect!! 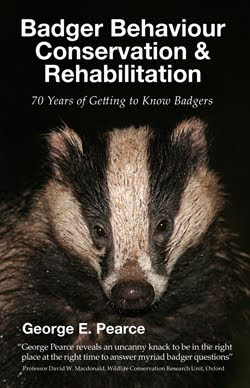 George Pearce’s book, entitled Badger Behaviour, Conservation & Rehabilitation, was my father’s present. I’ve just finished reading it and can wholeheartedly recommend it to anyone perusing this blog who would like to learn more about this fascinating animal. The subtitle is ’70 Years of Getting to Know Badgers’. George's passion began when he encountered his first badger whilst cycling home as a 14 year old during the famous arctic winter of 1946-7. His knowledge grew during the years he spent as a pig farmer, and he has been able to put everything he has learned to good use as a Badger Consultant since giving up farming in 1990. I say ‘good use’ advisedly. In the world of the amateur naturalist, wildlife consultants to developers and government bodies are often perceived as being ‘tainted’ by association and apt to side with the wishes of the organisation paying their fees – and I have certainly heard a few horror stories over the past few years – but George certainly comes across as someone with real integrity, always seeking to put the needs of the badger first and foremost. I guess some people will still struggle, though, with George’s response to the chairman of a local CPRE group wanting advice on the best grounds for objecting to the planned construction of a new road that happened to run right through George’s badger study area: ‘To her surprise I said they should welcome it with open arms. As the proposed route crossed arable land, I took the view that there would be far better habitat after construction than there was before; there would be more permanent grassed areas and a variety of small trees and shrubs would be planted.’

George writes in an anecdotal way, and the stories of his personal experiences are really enjoyable. Early on, he tells the story of being called out to check on a group of badgers marooned on an island after the Rivers’ Severn & Vyrnwy had overflowed their banks and inundated the surrounding countryside. George managed to wade across to find 11 badgers safe and sound, most of them – including 2 in the canopy of a tree – asleep! Checking them again the following day he writes, ‘As I got closer to the elder tree, I was greeted by a sight that will live forever in my memory. In front of me was a huge ball of badgers, half a metre above ground level, wedged between the wire fence and the tree trunk. Amazingly, they weren’t in any distress – quite the contrary, they were asleep, their breathing synchronized! I assumed there were nine badgers in the ball, as there were two fast asleep on a limb in the treetop.’ Fortunately, George took a photo of the scene which can be seen in the photo section of the book.

The main chapter headings give a real taster as to what this book is all about: Badger biology; The world of the sett; Badgers in the family; Badger rescue; Badger consultancy; Badgers and farming; Badger-watching. There’s also a useful index at the back. Within the chapters is a wealth of knowledge and practical advice that will really inspire both those with a developing interest in wildlife, together with those who regularly watch and read about badgers. I was amazed to learn just how much soil a badger can shift in an evening and, concerning tunnels, I was interested in George’s theory that badgers, like moles, build the tunnels to act as a means of catching worms & any other invertebrates which fall into them. He also proposes that most of the injuries reported indicate that the majority of fights between badgers are hierarchical rather than territorial in nature. As a former farmer, his discussion on bovine TB is enlightening, based on the observation of a vet: ‘To create a disease you have to create the conditions.’ George feels that we haven’t learned from the experiences of the past and that our agricultural biosecurity is nowhere near as tight as in years gone by: 'In the cattle industry, the increase of bTB has happened in parallel with the changes in management of dairy and beef cattle and if I were in farming today that's where I would want the research concentrated.'

George’s character shines through the pages of this book. Are there any conditions where even the most ardent badger-watcher is likely going to struggle to see anything? I quote: ‘But a cold east wind? Stay indoors and put your feet up. As Corporal Jones of Dad’s Army might put it: ‘badgers don’t like it up ‘em’.’

George concludes, ‘This farmer’s boy is old in the tooth now. The back creaks and the joints complain. But the wonderful memories live on and I feel very privileged that wild animals have allowed me to share part of their lives with them. I hope many of you will feel that way too.’
Posted by Steve Plummer at 7:02 PM No comments:

I'm almost embarrassed to say that, due to busyness followed by illness, today was the first day that I've actually had the chance to explore some of the local snowy wastes. I can hardly believe that I've missed out on so many brilliant opportunities to see what's happening in the local countryside by looking at the various tracks left by our wildlife. 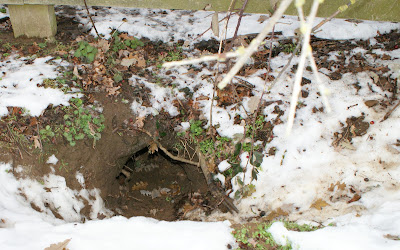 I took the opportunity to check a local sett that I haven't surveyed properly for a few years. There were 2 entrances under a fenceline and they both looked like they were well-used. Here, you can see where the Badger exits to the right-hand-side, leaving a trail of muddy snow!

Badgers spend a lot of time underground when it's very cold, so perhaps it wasn't surprising that it was difficult to find good tracks to photograph. This is about as good as it got!

When looking at some tracks from the rear, it was easier to see the 5 claws in a line, typical of Badger. 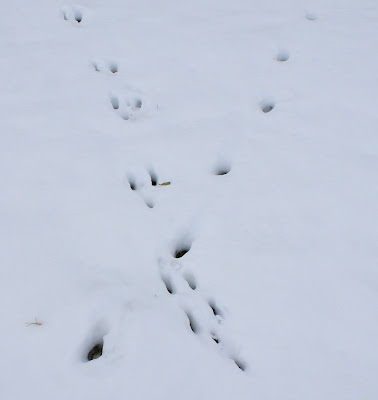 I walked right around the edge of Maggs Field in Ampthill Park. These are Red Fox & Rabbit tracks crossing one another.

I know that some people will hate me for saying this, but I hope we get more snow and I get the opportunity to get out a bit more!! :-)
Posted by Steve Plummer at 8:49 PM No comments:


If you missed it last year, here's my favourite Christmas greeting from all of our friends in the countryside. I'm recovering from the lurgee here - it will make it all the more satisfying to get out & about next week!!

Stephen.
Posted by Steve Plummer at 1:21 PM No comments:

Here are some photos of Thursday morning's Nestbox day at Duck End Nature Reserve in Maulden, courtesy of David Withers. Thanks to Peter Wilkinson for providing the necessary expertise in advising on, locating and erecting the boxes. 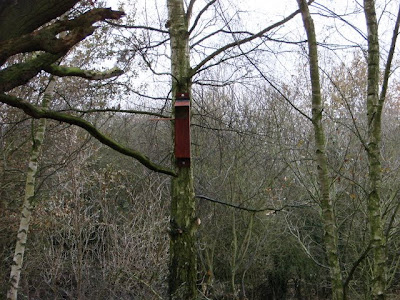 The first box to go up was this Tawny Owl nestbox. It looks very swish, but Tawny Owls are notoriously difficult to get settled. I've got high hopes for this one, though! 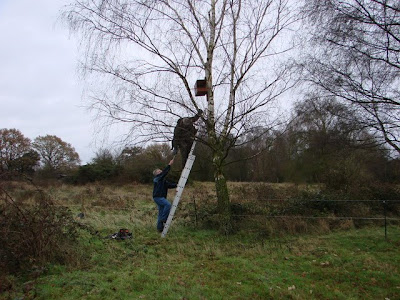 Earlier in the year I discovered a pair of Kestrels nesting on top of an old Crow's nest in the Silver Birch copse. This des res should be much more suitable for them! 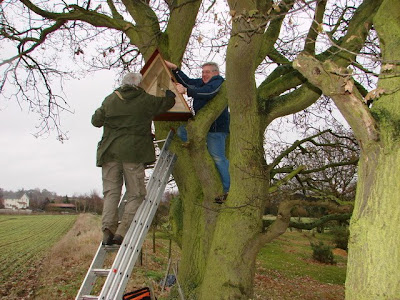 And, finally, here's the Barn Owl box being placed into position. That A-frame nestbox was really heavy, but it's fixed as solid as a rock, now. 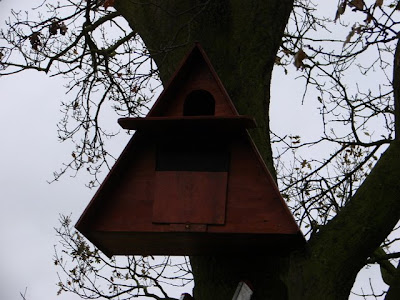 I'm tempted to put up a 'Vacant Possession' sign! We recovered some relatively fresh Barn Owl pellets from a local barn which I'm hoping to dissect over the next week or two. I can already see a Shrew skull and 2 sets of Field Vole incisors!!
Posted by Steve Plummer at 3:54 PM No comments:

I've had little chance to get out into the countryside recently, though I enjoyed a morning placing Barn Owl, Tawny Owl & Kestrel nest boxes at Duck End a few days ago.

A record shot of 2 of the 8 Waxwings that were present in Flitwick recently. The Waxwing invasion this year has been pretty impressive with just about all of the Scandinavian population swarming across the North Sea to feast on our berry bushes. 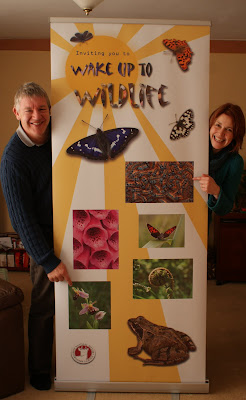 This is the banner that will accompany our nature table that will go into local schools next year (see below). We're really pleased with the result. Thanks to Andy Wyldes of Butterfly Conservation for helping to design it for us. It's being modelled by myself and Erika Pratt. 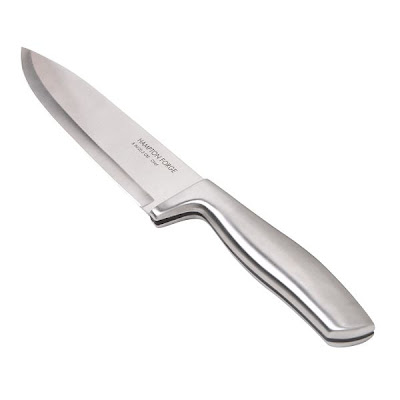 Finally, a photo of a Hampton Forge 8" Chef's Knife...I bought one of these yesterday to help me get my last mammal in these final few weeks before the year's end. Over the last 12 months I've watched numerous molehills gradually rising into the air, but I haven't yet caught sight of any of the occupants. This should help me locate runs and, maybe, cut around an 'active' molehill that I can then lift with a large spade, complete with surprised Mole....that's what I'm hoping, anyway! Watch this space.
Posted by Steve Plummer at 11:33 AM No comments: