During walks over West High Down in recent days I have come across a number of these large caterpillars making their way across the short grass or, in this case, across the tarmac of the adjacent road.

They’re the larvae of the Fox Moth or, as they call it in France, Le Bombyx de la Ronce! These caterpillars are big and hairy. I was hesitant to handle it for fear of the hairs having irritant qualities and causing a rash, but it turns out that I needn’t have worried and I’m informed that I can let the next Bombyx de la Ronce that I come across crawl up my arm!

They are members of the Eggar family of moths and the male Fox Moths are regularly seen during the day, too, but the females prefer the twilight hours.

I imagine the ones moving about at the moment are gorging themselves on bramble and the like before searching out for some cosy leaf litter in which to pupate and wait for the Spring. 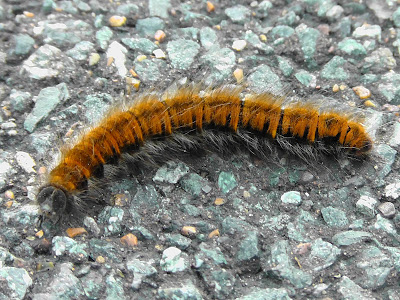 An early morning walk to the Needles and over West High Down came up trumps when I came across at least 9 Ring Ouzels, probably 10. Other birds of note included a beautiful Peregrine Falcon, a number of Wheatears & a Dartford Warbler. At Station Pond, Yarmouth, a single male Bearded Tit was spotted (there were 9 of these seen yesterday, too!). I've uploaded a bit of video of the Ring Ouzels:

A Ring Ouzel study group has been set up because of the decline of this species. On their website - here - they publish some interesting facts:

Ring ouzels were once (still are?) called Michaelmas thrushes on the Isle of Portland (Dorset) on account of their arriving during early late September - October on their southward migration. The great naturalist of the 18th century, Gilbert White of Selborne, also referred to ouzels arriving at Michaelmas.

An old Scots name for the bird is aiten chackart (ie chat of the juniper; aitionn = Gaelic for juniper; chackart = Scots for chacking bird).
750+ migrating ring ouzels were counted in just over 2 hours at Margate, Kent in Autumn 1998.

Ring ouzels generally nest in trees on the continent, whereas they generally don’t in Britain, preferring to nest under heather or bracken instead.
Although earthworms usually make up the bulk of their diet in spring and summer, they feed largely on juniper berries in winter.

Very occasionally, individual ring ouzels have been known to spend the winter in Britain.

Ring ouzels are now extinct as a breeding species in Galloway (south-west Scotland), whereas that region was a stronghold for them up until the late 1980s.

There are three races of ring ouzel, varying in the extent of white fringes to the (black/dark brown) body feathers. Britain and Fennoscandia have the nominate race torquatus which has the least white; race alpestris of continental Europe have more extensive white fringes on the body and flight feathers, whilst race amicorum of southern Turkey, Turkmenia and northern Iran, has a larger white crescent and even more extensive white fringes to the feathers than the latter. 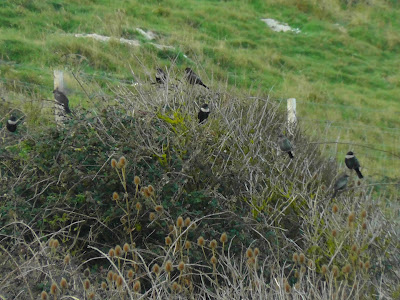