I've always loved Little Grebes. They may be little but they pack a big personality! The video features 2 adults feeding 3 juveniles. This may even be the third brood of the year.


The adults are feeding small fish to the youngsters (I also saw a prawn-like creature offered, too!). It looks like they haven't quite got the knack of swallowing these snacks yet. Sometimes the parent lets the fish drop in front of the young which begins to teach them to catch food for themselves.

Both of the sequences go a little blurry after a while, which is a shame, but I reckon that it's a really fascinating piece of behaviour and well worth sharing!
Posted by Steve Plummer at 2:24 PM 1 comment: 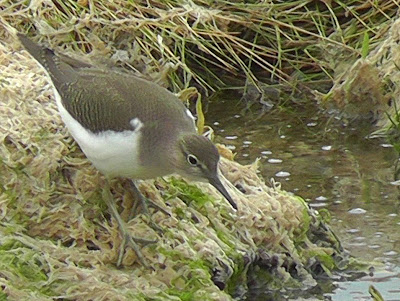 I was walking along the Western Yar Estuary first thing this morning and came across this Common Sandpiper.


I'm really pleased with this footage (apart from the sound of the telescope creaking as I rested the camera on it and panned around!). I continue to be amazed at just how confiding birds can be here on the island. At one point this individual was less than 5m away from where I was standing!


In Mill Copse I disturbed this Red Squirrel who ran up a tree and shared just how annoyed he was!

Lots of House Martins moving south this morning!
Posted by Steve Plummer at 1:35 PM No comments:

It was worth the mosquito bites to walk along the Western Yar estuary at dusk this evening. I failed to see the Barn Owl I'd hoped for and, although I hadn't really expected to see an Otter, you just don't know until you get out there to see what's around!

I stood by Mill Copse Pool, listening to a small flock of Black-tailed Godwits chuckling away below me. I spotted my first local Brown Hares - 2 of them in a stubble field watching a young Red Fox that energetically bounded up one of the tram-lines!

It was just great to enjoy the experience of being there on a beautiful calm evening....topped off by this distant Peregrine Falcon that I found roosting on the yard-arm of one of the yachts....wonderful!

There were at least 3 Greenshanks on the Western Yar Estuary this morning.


These two Greenshanks were at Kingfisher Bridge (the same place as the Common Sandpiper yesterday). The darker one is almost certainly a juvenile. Notice how it continually gives out its strident 'tew tew tew' call. Before I left the Bridge the lighter individual was calling, too, its call being softer and not so deep.


These two Ruddy Turnstones were foraging in a party of four close to the Yarmouth road bridge. One of them has still got some of its beautiful tortoiseshell breeding plumage. I love the way in which they headbutt the fronds of wrack aside to get at the tasty invertebrates beneath....no messing! 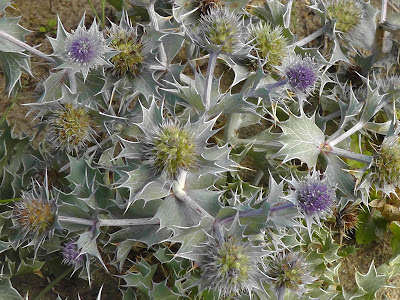 I was really struck by the beauty of the Sea Holly growing on the dunes at Norton Spit. Surprisingly, it's a member of the Carrot family with a deep taproot. The photograph doesn't begin to express just how dramatic the metallic blue colour of the developing flowerheads is in this plant that is a favourite of flower-arrangers everywhere. In Shakespeare's The Merry Wives of Windsor, Falstaff declares,

"Let the sky rain potatoes;
let it thunder to the tune of Green-sleeves,
hail kissing-comfits and snow eringoes [sea-holly],
let there come a tempest of provocation..."

It felt a bit like that in the wind today!
Posted by Steve Plummer at 7:45 PM No comments:

During my late afternoon cycle-ride along the Western Yar Estuary yesterday I had a brief glimpse of my first local Common Sandpiper as it flew across the estuary in the distance.


I was really pleased when I got a closer glimpse at Kingfisher Bridge first thing this morning.

This is almost certainly an adult bird that has been making its way south as it heads towards its winter quarters. It's got a long way to go because it will spend the winter in western Africa, south of the Sahara. The young birds start to move south from their northern breeding grounds in September. You can see the characteristic bobbing action of this bird - a behaviour known as 'teetering' - as it looks for insects and other invertebrates on the surface of the mud.
Posted by Steve Plummer at 12:32 PM No comments:

There is a lot of Angelica & Hemp Agrimony flowering on the banks of the Western Yar River at Afton Marsh, and a gentle stroll revealed some pretty impressive insects nectaring on the flowers.


I posted some photos of the humungous hoverfly, Volucella zonaria, a few posts ago. Here's a video clip that I couldn't resist uploading, too! I'm sure it won't be the last!


I had 6 Jersey Tiger moths attracted to my back garden moth trap yesterday evening, but this is the best way to see them. I love the way in which it constantly bobs its head up and down in order to manoeuvre the probocis into the flowers. I can't remember seeing this action in the butterflies I have watched - maybe their probocis is more flexible?


And this is the impressive soldierfly, Statiomys potamida. This is a species that used to be quite scarce, but which now seems to becoming increasingly frequent. 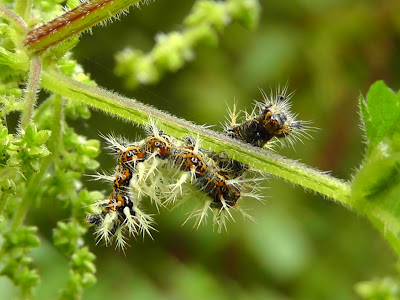 I came across this dead Comma butterfly caterpillar. I've no idea whether it was parasitized or had a fungal infection but it looks strangely beautiful, even in death! 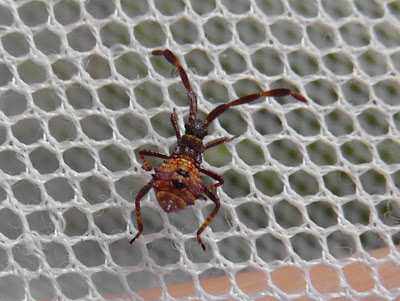 I swept a number of these nymphs from an area with a number of Dock plants. That together with the 2 raised 'bumps' on the dorsal surface seems to suggest that they are Coreus marginatus, the Dock Bug.

Mammals are my favourite subject of study, and it's been so long since I last left the Trailcam out for a night so, yesterday evening, I fixed it up at Sett C.


Unfortunately, I set up the camera so that it was pointing too far to the left of the view I wanted, but I managed to get this footage of 3 Badgers, followed by another piece featuring what looks like a pretty big individual.
Posted by Steve Plummer at 8:36 AM No comments:

There were 7 Jersey Tigers in the moth trap this morning. 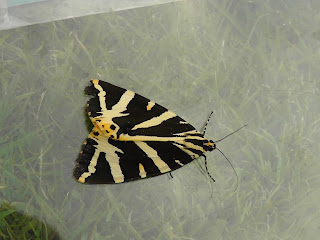 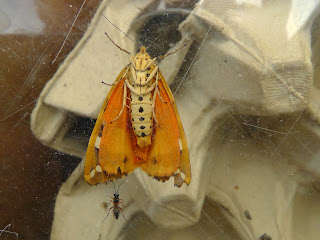 At this time of year it's not difficult to catch up with them during the day, too. I saw my first one some years ago in France - I never expected to ever have them turning up in my moth trap! 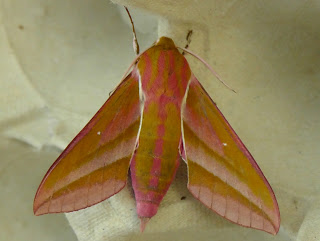 Other sightings over the last few days have included this Elephant Hawk Moth. 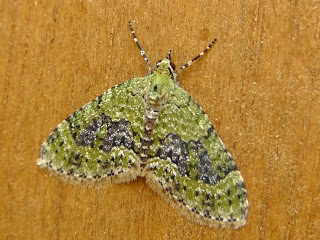 And this Yellow-barred Brindle...which looks pretty green!
Posted by Steve Plummer at 7:45 AM 1 comment: 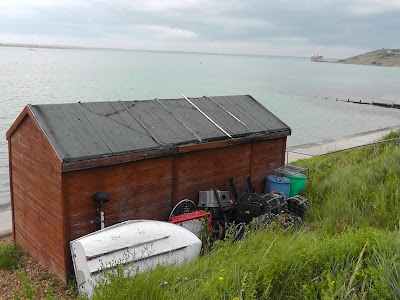 After having spent the day cooped up in the house working on the computer I took the opportunity to escape early this evening and walk down to Colwell Bay and, then, along the promenade to Totland Bay. 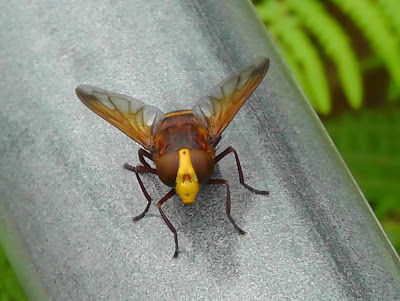 As I walked down the steps to Colwell Bay I was faced with this fiercesome looking creature perched on the hand-rail! 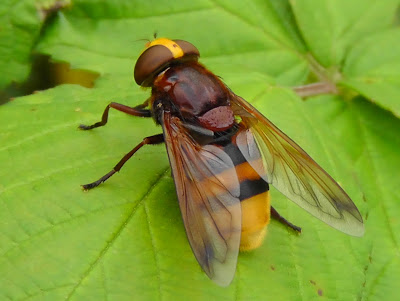 It's Volucella zonaria - what I'm calling the Mega-hover. It's a humungous hoverfly with a wing span that's not too far short of 5cm! 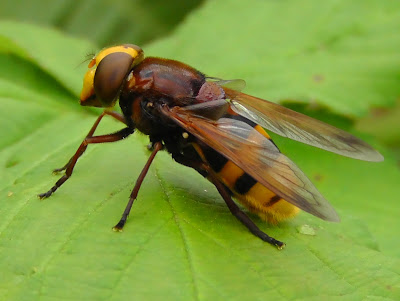 It was in the 1940s that this giant suddenly started to appear regularly in the UK and the last few years has seen a dramatic expansion of its range northwards. The larvae develop in wasps' nests where they seem to both scavenge around and eat the growing occupants!

They're harmless.....but they would give anyone a shock if met head on! 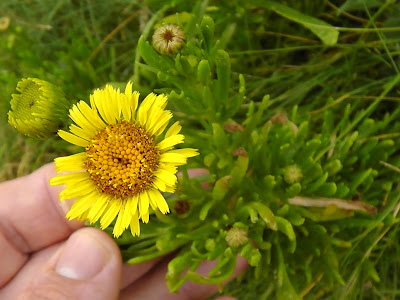 I was also pleased to record this plant in Totland Bay. It's Golden Samphire which, according to the IOW Flora (2003) is confined to the Newtown & Medina estuaries. There is a large population on Hurst Spit which can be seen from this spot and may very well be the source of this plant.
Posted by Steve Plummer at 9:46 PM 2 comments:

An Ambush of Tigers 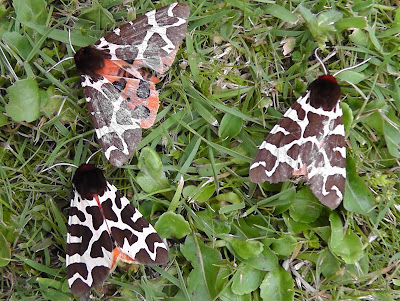 A pride of Lions...a leap of Leopards....and an ambush of Tigers is the name given to a group gathered together. And I came across my own ambush of Tigers in the back garden this morning when I went to empty the moth trap. The Garden Tiger is my favourite moth because I still remember coming across one at a Scout Camp at Leek Wootten in Warkwickshire in the early 70s and being taken aback by its beauty. I hadn't seen any since then.....until a few weeks ago when they started turning up regularly in the moth trap....my cup runneth over! 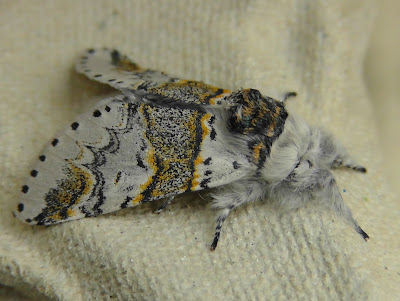 This Sallow Kitten added another touch of class!
Posted by Steve Plummer at 9:01 PM 3 comments: 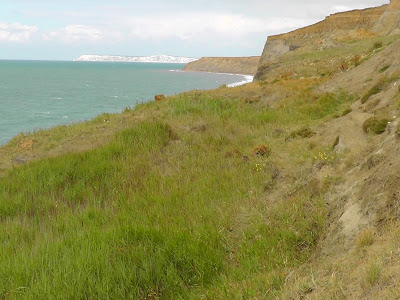 The undercliff at Whale Chine is a fascinating place, formed of soft cretaceous rocks with the dramatic chalk cliffs of the West Wight in the distance. The erosion of the steep wooden steps to the bottom led to the Council closing the footpath back in 2005. Safe access requires a healthy walk along the beach from further down the coast. 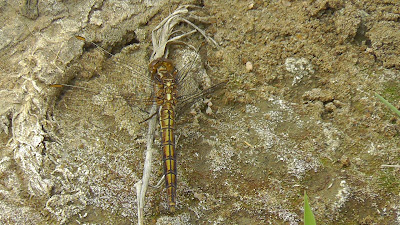 It was here that I caught up with my 35th British dragonfly species - the Keeled Skimmer. It was really difficult to get decent photos or video footage. This female is the best of a bad bunch! I managed to spot half-a-dozen males and several females. 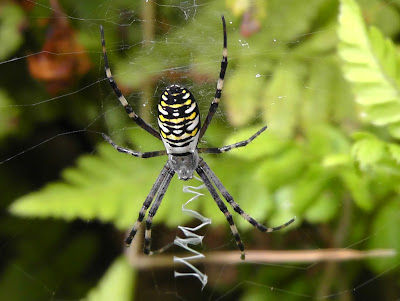 This Wasp Spider has a dramatic livery. The zig-zag pattern on the web is a feature of this species. 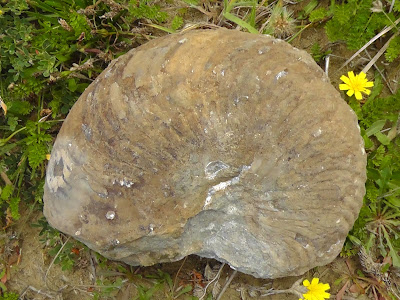 According to the Wikipedia entry, Whale Chine is famous for its fossilised Oysters, Lobsters....and Ammonites. This is the biggest fossil that I've ever come across!
Posted by Steve Plummer at 10:50 PM 2 comments: 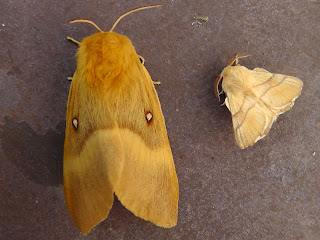 The Eggar family consists of some of our most fascinating moths, and there were two representatives in the moth trap this morning which are both new to me. The giant on the left is a female Oak Eggar. The moth on the right is a more diminuitive male Lackey.

I popped out to check the moth trap before going to bed yesterday evening and, as I peered over the edge, the Oak Eggar flew past my ear and straight in! It tends to be females which turn up in moth traps, the males often zipping about during the day. You can't see the abdomen in this photo but it's pretty thick and must be full of eggs which she will scatter about as she flies.

The Oak Eggar larvae feed on a number of trees & shrubs....but not Oak, funnily enough! The name comes from the cocoon's similarity to an acorn! And 'Eggar' refers to it's similarity to an egg. There's an interesting article in Somerset Life that includes a photo of the cocoon.
Posted by Steve Plummer at 11:10 AM 1 comment:

During the Butterfly Conservation Walk at Tennyson Down on Friday we saw three Dark Green Fritillery butterflies.....


...including this impressive individual nectaring on Spear Thistle. We saw 18 species of butterfly in all. 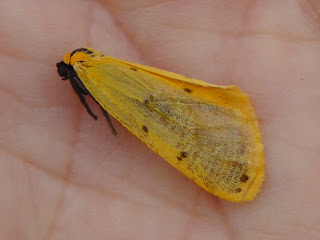 This Dew Moth - quite an inert individual - was a new species for me.

Other moths seen over the last few days include: 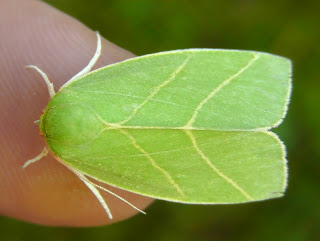 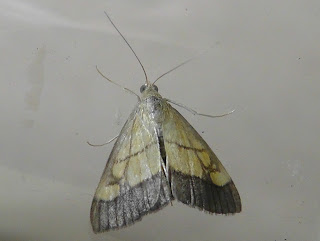 Evergestis limbata - which was recorded for the first time in the UK in the early 1990s here on the Isle of Wight. 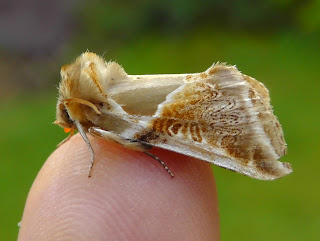 Buff Arches - another impressive one! 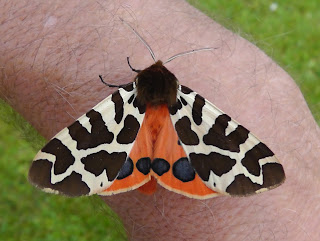 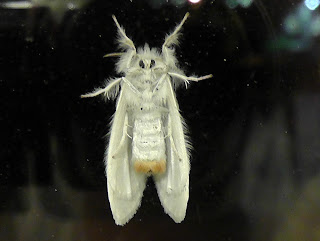 ....and a Yellow-tail at the kitchen window late one night!
Posted by Steve Plummer at 8:05 AM 2 comments: