One of the things I would like to do on this blog over the coming season is to share just how varied our Hoverfly fauna is, and what makes the species so fascinating. 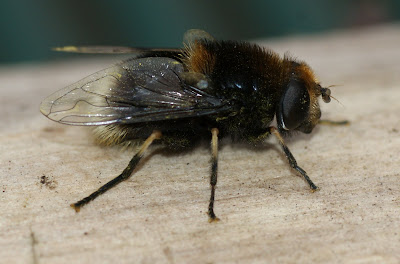 A flowering Sallow in marshy ground on Flitwick Moor is an ideal habitat for Eristalis intricaria. I've never seen more than one at a time before but, over 20 minutes or so, I managed three separate individuals, plus another close by sunning itself on a south-facing silver birch trunk. Note the pale base of the rear femur ('thigh'). This is a really beautiful hoverfly - with its blend of colours: white, black and ginger. I'm hoping to find some of the other colour variants over the coming year, too. 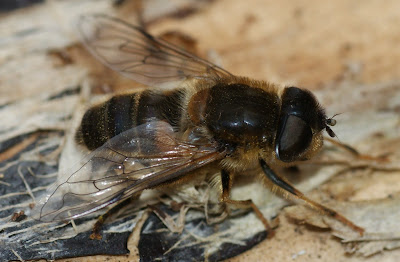 When I netted one of the Eristalis intricaria specimens, I also found this individual which must have been out of sight on the far side of one of the Sallow flowers. It's Eristalis pertinax, a member of the same family (notice the obvious 'Eristalis-loop' wing vein in both of these specimens). In fact, I would describe it as E. pertinax var. yeti, on account of its hyper-hirsute appearance, a feature of the spring generation compared to those that will appear later. It really threw me for a moment and I thought I'd better double-check with John, our erstwhile Hoverfly Recorder. The pale front tarsi (feet!) clinch it. There will be lots of these over the coming months!
Posted by Steve Plummer at 9:51 PM No comments:

First hoverfly of the year: Eupeodes luniger.
Posted by Steve Plummer at 4:11 PM No comments:

At 8.30pm this evening, I decided to visit Duck End Nature Reserve in Maulden to survey for Great Crested Newts. One was reported last year so we need to establish whether there is a breeding colony here, and one of the best ways of doing that is by 'torching' likely water bodies when darkness has fallen.

I spent the next hour and a half slowly walking around the Reserve and shining a lamp into the ponds. A pair of Muntjac watched me, bemused!

I found Common Toads in each of the ponds where good numbers of egg strings could be seen.

I finally found a small colony of Smooth Newts in what we call Pond 3. A dozen or so were swimming around in the 'Sallow Corner'. I only saw one definite male, though some were outside of the circle of light and, although they looked like females, may have been males, which can take several weeks to develop their full breeding characteristics after entering the water. I fished out the female above for a better look.

I shall be surveying a few other ponds over the next few weeks....watch this space!
Posted by Steve Plummer at 9:48 AM No comments:

The Hare & the Tortoise! 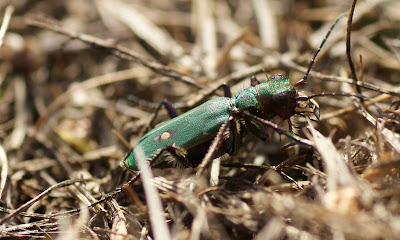 These photos of a Green Tiger Beetle were taken at Cooper’s Hill Nature Reserve late this afternoon. I found it really difficult to get a decent shot, not least because of the frenzied nature of these beasts (plus the fact that I’m a bad photographer, of course!).

Look at those purple legs and eyes, which really contrast with the creamy yellow wing case spots and the fiercesome jaws!

This voracious predator sprints after prey, overpowering the likes of grasshoppers, flies & caterpillars before slicing them apart with its mandibles. In fact, ‘tiger’ seems a very apt name!

And this is the Tortoise: 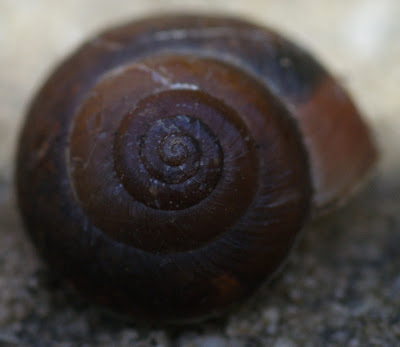 A snail. But not any old snail. This is a snail with a fast-growing reputation. This morning, it went first class via the Post Office to Peter Topley, our local Mollusc Recorder, for confirmation but we think it’s the Girdled Snail (Hygromia cinctella) which is making its way across the UK…..slowly!....after first being spotted in Devon in 1950. It’s a Mediterranean species and probably arrived via imported garden plants.

The interesting story behind this specimen is that I found it in my back garden on Wednesday, the day after Peter had told those present at the Bedfordshire Natural History Society’s AGM to be on the lookout for it, having found one himself!
Posted by Steve Plummer at 6:41 PM 2 comments:

I spent a few hours this morning in the company of John O’Sullivan & Joan Childs. We were searching a local wood for the larvae of the rare hoverfly Callicera spinolae. Over the last few years, John has spotted adults nectaring on Ivy flowers in the Autumn. The larvae develop in the rot holes of trees like Maple and Ash, and so we arrived armed with spoons, ladles, ice-cream boxes, pale sheets….and a ladder!

As we made our way to our starting point we had a couple of views of a Fallow Deer. A little while later we also put up three Woodcocks from under our feet. 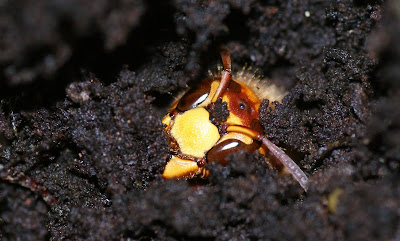 John began to scrape out the contents of a rot-hole and was taken aback to suddenly find a queen Hornet staring back at him. We were surprised to find her in a situation like this!

A little while later we were rewarded with our first Hoverfly pupa. There were 4 together and John has taken them home to breed them out. 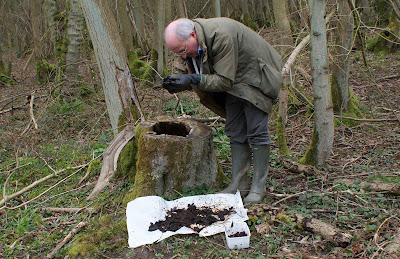 Joan then found a rotted stump with a soup of water and detritus inside. John & Joan ladled out the contents and found a large number of hoverfly larvae: 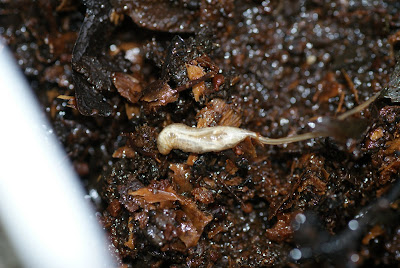 These are Rat-tailed Maggots, the larvae of one of the Eristalis species of Hoverfly. A number of them were bagged up so that they could be bred through, too!

We never did find the larvae that we were looking for, but it made for a great morning in the fresh air! Oh, and we never did use the ladder!

UPDATE: The first pupae turned out to be the uncommon hoverfly, Criorhina floccosa, whilst the Rat-tailed Maggots emerged as Myathropa florea.
Posted by Steve Plummer at 7:13 PM No comments:

Dreaming of the spring! 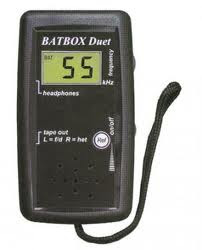 It's been a really tough day today and, being stuck in studying while the sun has been shining, hasn't helped....but I've just answered a knocking at the door to a Fex Ex parcel and my new Batbox Duet bat detector. Carole insists that I save up for things, and I've been saving for this over the past 5 months, so there's Birthday money, Christmas money & pocket money all invested in this...exciting or what! And they've even put a battery in it so that I can look at the dial and listen to the interference as I dream of Pipistrelles chattering and Noctules chopping! 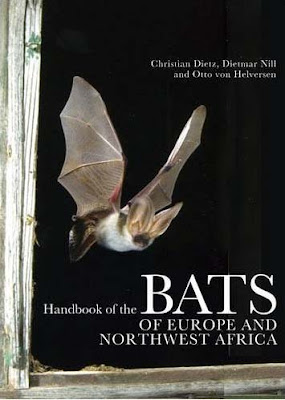 I've also been preparing for the new season by leafing through Bats of Britain, Europe & Northwest Africa, by Dietz, Helversen & Nill. I can't begin to tell you just how good this book is. It covers all of the 51 bat species of the region with flowing text alongside one superb image after another from beginning to end. The chapters covering topics like echolocation, foraging and feeding behaviour, hibernation and population ecology are also worth their weight in gold. I can't wait for the warmer evenings! 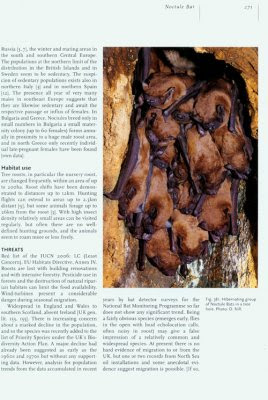 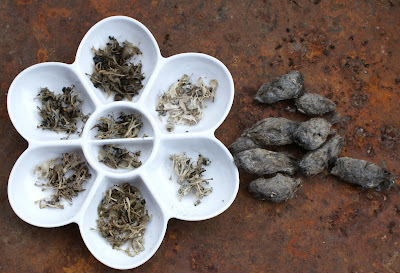 Recently I soaked 7 Barn Owl Pellets from a barn in Maulden and separated out the bones. The plastic paint tray from Staples (£1.49!) is ideal for separating out the contents of the pellets. I can see an assortment of Vole, Mouse & Shrew skulls amidst the bones. I'll try to find time to identify them to species over the next week or so. The pellets on the right are a few of a pile of Tawny Owl pellets that I have yet to sort out!

Whilst sorting out the Barn Owl pellets, this little moth suddenly fluttered out of the bag. I would need to confirm this, but I think that it may be the Skin Moth, Monopis laevigella, which is one of several members of a family that feed on owl pellets, dead animals and the detritus in birds' nests. Although the adults normally fly through the summer, keeping the pellets in my study over the winter may have confused this one!

[Update: Thanks to Skev who has pointed me in the direction of the Case-bearing Clothes Moth (Tinea pellionella) which seems to fit the photo and which has been found in owl pellets (see Skev's comments). I should get a confirmation from our Micro-Moth Recorder in due course]
Posted by Steve Plummer at 1:16 PM 2 comments: