If, like me, you're fascinated by Stoats, check out this amazing photo sequence!
Posted by Steve Plummer at 11:01 PM No comments:

With temperatures rising and a mild evening promised, I’ve just put the moth trap out for the first time this year. Here’s two I caught earlier in a wood near Steppingley:

I think that this may well be the micro-moth, Tortricodes alternella, which can be abundant in woods this time of year.

And this one conveniently flew past my nose: Acleris notana. 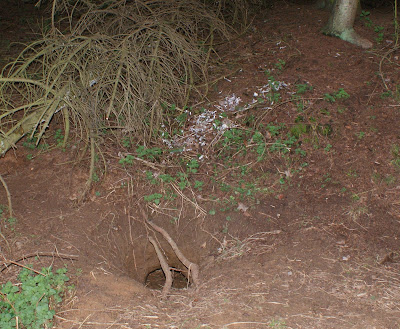 I checked out the Badger sett in the wood. This entrance had the feather remains of a Wood Pigeon directly above it. If it is a Badger, rather than a Red Fox, that has consumed it, I assume the rest of the bird has been eaten or else dragged down into the depths! Birds are well-known features of Badger diets, though at a very low ratio compared to other food. Remains found tend to comprise the chicks of ground-nesting birds. I assume this Wood Pigeon was carrion! 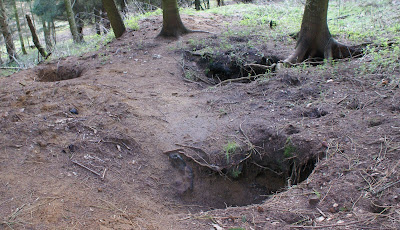 This is the main part of the sett. There’s been a lot of digging going on since I was last here. 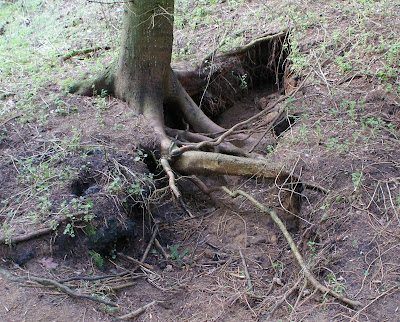 The tree above this entrance has been so undermined that it wouldn’t surprise me if it keeled over on a windy night. The old entrance is to the far right of the trench. You can't see it on the photo, but a new entrance has been made right under the main trunk, and the soil is already subsiding on the far side! 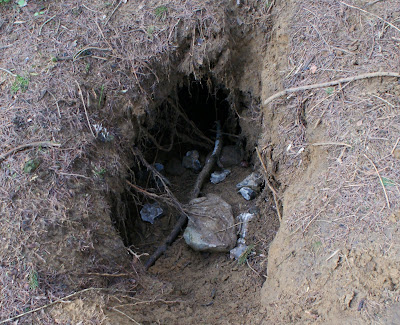 There’s been a lot of digging going on in the new entrance on the left-hand side, too. This large flint is on the entrance floor.

There were further broken shards of flint on the ground directly above which look like they’ve been deliberately broken apart. Would this be the result of some form of play?

It looks like they’ve been eating well, though, as this latrine close by shows! 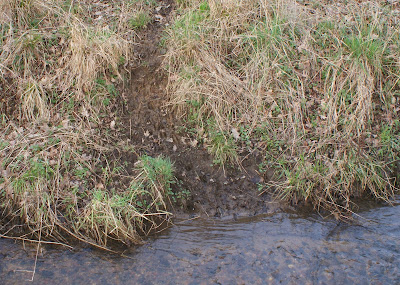 I followed the line of a brook within the wood and found two places where the Fallow Deer cross from one side to the other. You can just make out the slots in the wet mud in this photograph. I’m tempted to come here early one morning soon and see if I can see them.

And, last but not least, a beautiful spider. The features all seem to fit the Green Crab Spider (Diaea dorsata). The brown spots on the legs and distinctive palps (not seen well on this photo) would make it a male. I swept it from the branch of a conifer, which is one of its habitats according to the book!
Posted by Steve Plummer at 8:35 PM 1 comment:

Snake in the grass!

Hearing from Sue & Liz about the appearance of an Adder in the Maulden area yesterday, I used my lunchtime to have a look for myself. This is an extremely early record, even given the strong sunshine. The head was still sandy following its emergence from the nearby hibernaculum. I reckon it's a good-sized male. Male Adders usually emerge a while before the females and spend their time basking in the sunshine so that the sperm can develop, but I reckon this one has probably gone back to ground following today's much cooler temperatures! 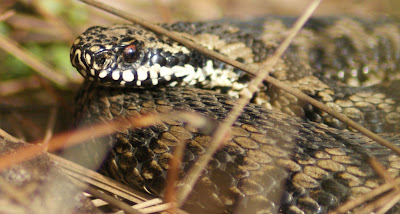 Here's a close-up of the head. The patterns really are quite amazing when you see them close up. The eye appears to be very sunken.

There were Seven-spotted Ladybirds everywhere. It was only when I cropped this photograph that I noticed the Wolf Spider. Is it hoping for a meal, or enjoying the warmth generated by the Ladybirds? 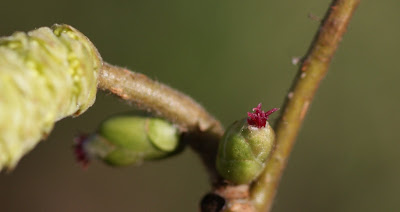 I love seeing the Hazel catkins and watching the clouds of yellow pollen disperse in the wind. But it's easy to miss the tiny little female flowers on the twigs.

On the top of this stump by Tom's Pond there were the remains of several Red Fox scats. I've seen scats left on stumps like this several times before.
Posted by Steve Plummer at 6:46 PM 2 comments: