The accounts of the last few weeks underline how few mammals I have seen during my travels compared to last year. It demonstrates how it often takes a bit of effort to see them.

Arriving back in Bedfordshire at 1.30am this morning after having taken my youngest son back to University in Canterbury, I decided to have a quick drive around the 'Steppingley Triangle' before going home. The results were: 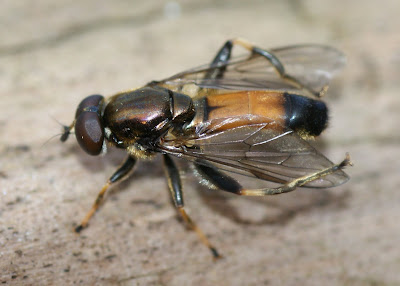 Xylota segnis will often be seen sunbathing and running over logs or Bramble leaves. This one is favouring us with a view of the red patches on the tergites which are usually obscured by the folded wings. 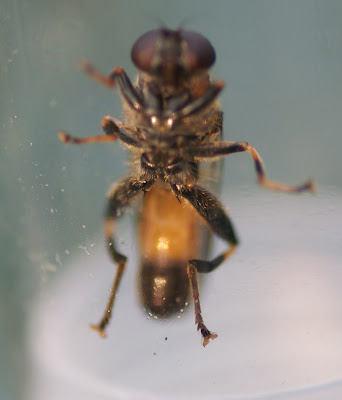 Here, you can just make out the spines that are present at the top of the hind femur in the males. 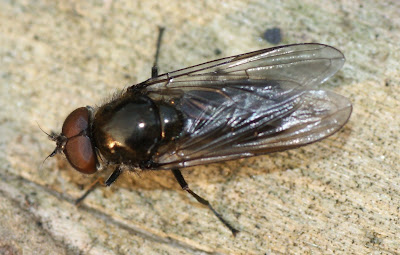 A big black hoverfly with dark wings, especially if it happens to hold them in 'delta-wing' mode (not this one, though), is likely to be Cheilosia variabilis.
Posted by Steve Plummer at 1:43 PM No comments:

A quick walk along the brookside vegetation at Randall's Farm yesterday was very productive.

This Blue-tailed Damselfly is yet another species that has appeared very early this year. I don't know whether any more have been recorded in Bedfordshire or wider afield, yet, but this must be one of the first. 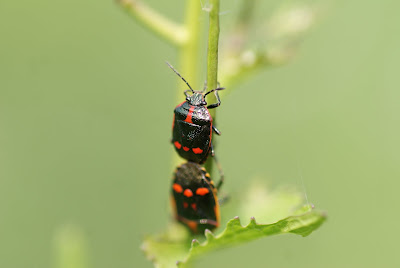 This is the beautiful Brassica Shieldbug (Eurydema oleracea). There were good numbers in the tops of the Garlic Mustard plants. And they're obviously in the mood for love! There are two colour forms which were both present. This is the red-spotted form. 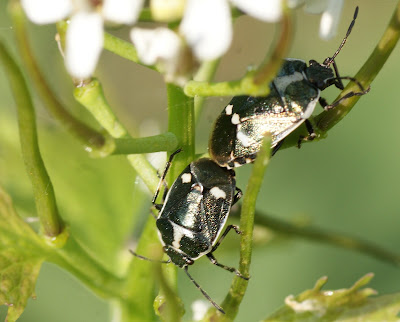 And this is the white-spotted form. I noticed today that all of the breeding pairs were composed of red-spot with red-spot, and white-spot with white-spot. Is this always the case? And, if so, does this indicate that the two forms are on the way to becoming two separate species??

Update: I've just found 2 photos of the different forms mating with one another on the British bug id website here. So that puts paid to that rumour! :) Sheila Brooke sent me this quote from Roger Hawkins' 'Shieldbugs of Surrey': 'the colours are partly but by no means wholly linked to the sex and age of the insect.' He also says that when mating pairs were looked at the red-spotted ones were mostly female and the white-spotted mostly male. Fascinating! 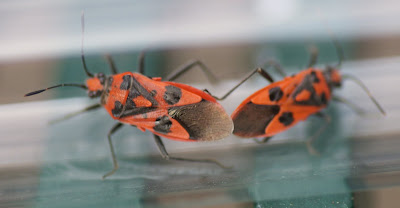 A few years ago I was fortunate in recording the first of these bugs to be found in Bedfordshire. It's Corizus hyoscyami. They were in the process of spreading inland from the coast....and Bedfordshire is about as far from the coast as you can get. This poor photo shows that they are continuing to do well!!
Posted by Steve Plummer at 1:13 PM 3 comments:

As the weather hots up, so does the moth season! Here are a few from the trap last night....

Early Grey...I wonder if we will get any eggs on the Honeysuckle in our garden, the caterpillar's foodplant? 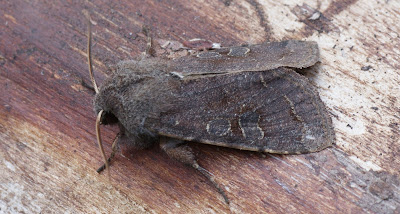 Clouded drab....with that deep maroon hue, I don't think that it's drab at all!

I love this moth. It's the Lunar Marbled Brown, 'lunar' referring to the crescent moon shapes on the wing. The caterpillars feed on oak.

And here are two colour variations of the Shuttle-shaped Dart. They are also named after a shape on the wing, in this case the narrow oval shape on the wings which reminded the person who named it of a weaver's shuttle. 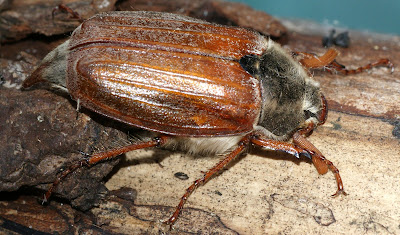 Last, but not least, the Cockchafer season has begun. It can be quite scarey examining the moth trap at night when these blighters are around. They are the Kamikaze insects of the night world, setting their sights on the light, and honing in with unerring accuracy. There is a last minute drone before they crash into the trap....or the person standing nearby, which can give you quite a shock!
Posted by Steve Plummer at 9:51 AM No comments: 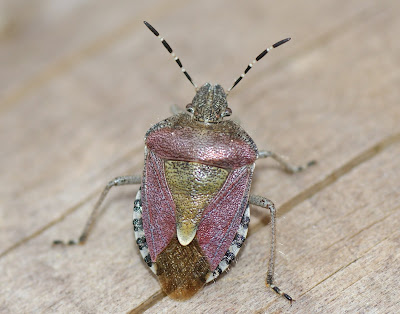 A few more photos from yesterday's saunter along the Randall's Farm brook. A Green Shieldbug (Palomena prasina) flew past me and up into the top of a tree. A short while later I came across a number of Sloe Bugs (Dolycoris baccarum). It's sometimes called the Hairy Shieldbug - you can just see some of the long hairs on the abdomen in this photo.

This tiny Yellow Tail Moth caterpillar has emerged from its winter cocoon and is searching for food. I didn't handle it because the hairs can cause a serious rash! 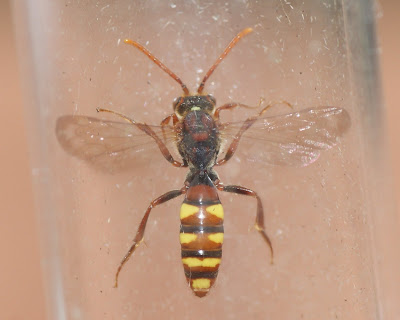 Finally, a number of Nomada-type bees were flying around, including this species. The beautiful markings look pretty distinct, so I hope someone will be able to help me with the id.
Posted by Steve Plummer at 9:26 AM No comments: 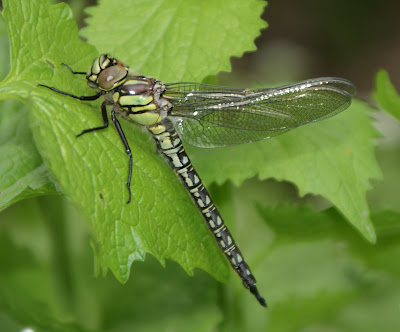 I popped into Randall's Farm this afternoon to see what hoverflies were around....quite a few species as it turns out, but the best sighting was my first dragonfly of the year, a male Hairy Dragonfly perched on Garlic Mustard. This is a very early date for this species, so it's worth a photo, even though it's a bit blurred!
Posted by Steve Plummer at 5:26 PM 2 comments:

You may remember this photo of an unknown Hoverfly pupa - one of four - found during a search for Callicera aurata pupae with John O'Sullivan & Joan Childs a few weeks ago. 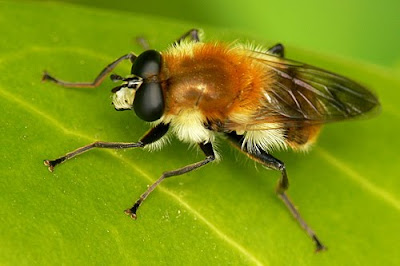 Well, John informs us that two of these beauties have now emerged. It's Criorhina floccosa, not a species you see every day. This photo - credited to Walwyn's Photostream on Flickr - shows a male. A male and female have emerged so far with 2 pupae yet to reveal their hidden secrets.
Posted by Steve Plummer at 5:54 PM No comments: 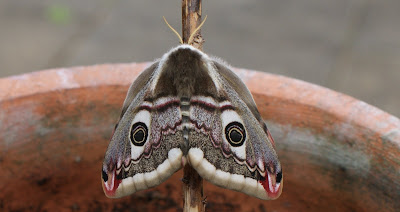 I've been expecting my Emperor Moths to emerge for the last few days. I even took them with me to the Isle of Wight at the weekend!! At lunchtime today I was overjoyed to find a newly emerged female Emperor Moth in the tank. I took it outside and placed it on a plant stem as it spent the next hour or so pumping out its wings and getting used to its new existence. It was soon joined by an emerging male. 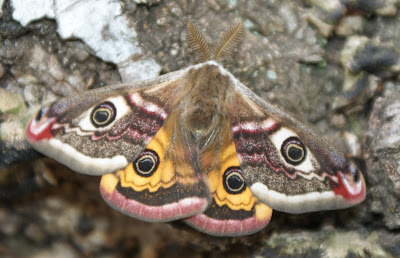 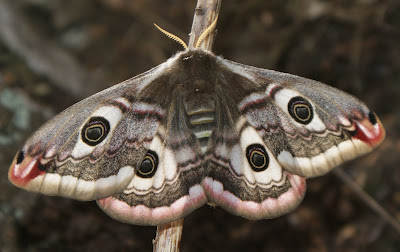 I took the 2 moths up to Coopers Hill to see if I could attract any males to the female who was, no doubt, pumping out a cocktail of pheromones. There was no response over the next hour or so, which may have had something to do with the strong wind...but it was fascinating watching the pair of them. 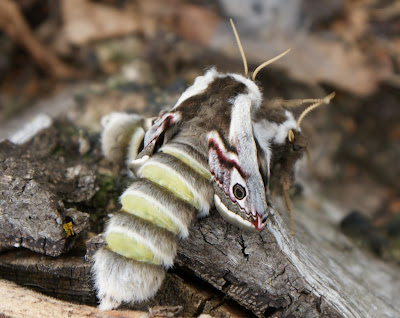 I looked back down at the plastic tank to find that 2 more moths had suddenly appeared!! 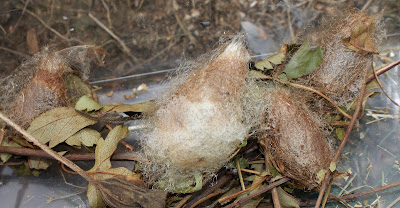 And here are some of the silken cocoons from which the moths emerged. I shall have to keep my eye on these over the next few days....there's more to come yet!
Posted by Steve Plummer at 10:40 PM No comments: 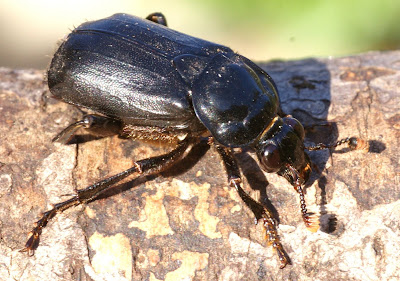 One of the things about moth traps is that they don't only catch moths! Yesterday evening this turned up. It's Nicrophorus humator, a species of Sexton Beetle, so-called because of the way in which pairs cooperate in burying a carcass before laying their eggs in a nearby tunnel. All of these beetles have orange markings on the wing cases except for this one which is totally black apart from the red tips to the clubbed antennae.

When burying a carcass the pair will sometimes cut off the limbs to make it easier...it's ironic that this individual is missing one of its lower legs!

The other thing about these beetles is that they are inevitably covered in Mites. The Mites hitching a ride on this individual ran out of sight as soon as I brought it out into the sunlight. It reminded me a bit of those scarey films where nameless horrors of the night scuttle away when the door is opened or the light is switched on!
Posted by Steve Plummer at 3:36 PM 1 comment: 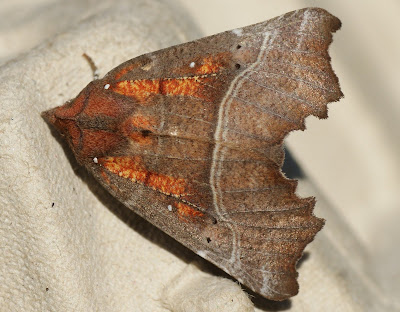 With the promise of a warm evening, I set the moth trap up last night and was chuffed today to find my first Herald moth for the garden. I've seen these beauties hibernating in ice houses during bat hibernation surveys, but this is the first time I've seen one close up. It's a beautiful creature. And I love its Latin name: Scoliopteryx libatrix - sounds like a character from Harry Potter! Look at those wings - it looks a bit out of place perched on the corner of an egg tray, but you'd walk right past it if it was in its usual daytime habitat amongst dead leaves!
Posted by Steve Plummer at 6:14 PM No comments: