Last week I turned my camera on.......and nothing happened.....dead as a dodo, which is why the posts have dried up! The following day, I had some amazing close views of a juvenile Shag fishing underwater and swimming about either side of the Yarmouth Road bridge....it would have resulted in some of my best ever footage, so I was slightly frustrated! :)

The upshot is that the camera has been sent to the Jessops repair facility....£25 non refundable deposit to find out what's wrong so that - hopefully - I can get if fixed at an affordable price. Hopefully normal service will resume in time, but it could be a while!
Posted by Steve Plummer at 8:35 PM 4 comments: 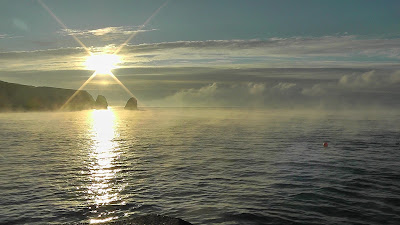 Freshwater Bay was a beautiful sight at 8 o'clock this morning, with a light mist moving across the water:

Four Guillemots were feeding off Fort Victoria, and a Gannet from the window of Gossip's Cafe on the Yarmouth waterfront brought a record total of 77 bird species for the week (not that I've been counting for very long!).

Several people were fishing on the pier, this Corkwing Wrasse (and a Ballons Wrasse) being landed as I watched: 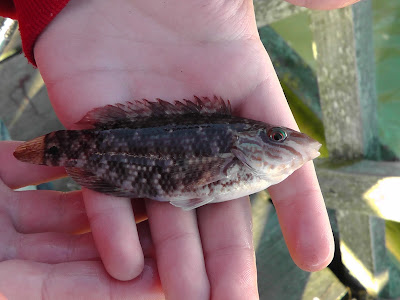 Posted by Steve Plummer at 10:13 PM No comments: 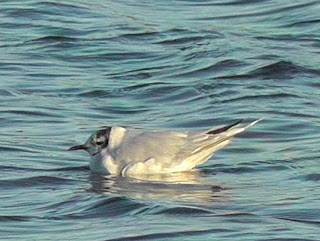 I was really pleased when I encountered my first Isle of Wight Little Gull, close to the Freshwater Causeway, first thing this morning. With a really high tide, there were only 3 white 'blobs' on the water and I almost cycled past. But I'm trying to discipline myself to keep looking so I stopped and had a look....and it's a good job that I did! :-)

Its Latin name is Hydrocoloeus minutus and, on the video clip below, you can see just how diminutive it is compared to the Black-headed Gull behind. Indeed, this species has the distinction of being the world's smallest gull.

Small it may be, but it can travel, a juvenile Little Gull ringed in Sweden being found dead on a road in Pennsylvania during its first summer according to an American website.

It took off and looked very tern-like as it bobbed and weaved on its way up the estuary. I didn't re-find it.