Several people have asked me when I'm going to continue posting reports to this blog. It's been a crazy few weeks with little time to write anything up. I'm also changing the name again as I've now discovered another local website with almost the same name as 'Wild on the Wight'. So I'm going to call it simply, 'The Wild West'! A walk over West High Down this morning resulted in sightings of 2 special birds that made my heart leap.

Assuming it's the same one, this Wryneck has been around on West High Down for at least the last week or so, but I had only managed a brief view as it flew away before today when it 'performed' close by for a good 10 minutes or so. I think the Wryneck is one of the most amazing birds - in plumage, behaviour and reputation - but this once common bird is only usually encountered as a passage migrant in the early autumn nowadays.

Its Latin name is Jynx torquilla. 'Torquilla' means 'little twister' and refers to its ability to twist its head around like a snake. It's this characteristic, with the snake's association with fertility and eroticism in the ancient world, that led to the 'Jynx' part of the name. The relevant section in Birds Britannica makes for fascinating reading:
'In ancient Greece and Rome wrynecks were associated with fertility rites that involved a rotating wheel-like charm known as a Iynx. The bird was apparently spread crosswise in the wheel as it was spun, when the device was thought to have the power to charm a prospective partner or, according to one source, bring back an errant lover.
On the evidence of Greek mythology, the bird magic worked equally well for both sexes. Aphrodite, for instance, helped Jason win the heart of Medea at Colchis with the aid of a wryneck wheel, while the goddess Iynx worked a similar spell on Zeus so that he fell in love with a beautiful moon-goddess called Io. Unfortunately, Zeus' official consort, Hera, learnt of her husband's infatuation with Io and punished her rival by changing her into a white heifer, while the spell-casting Iynx was herself transformed into nothing less than a wryneck.'

Hmmm, there were several heifers in the field behind the wryneck! :-) 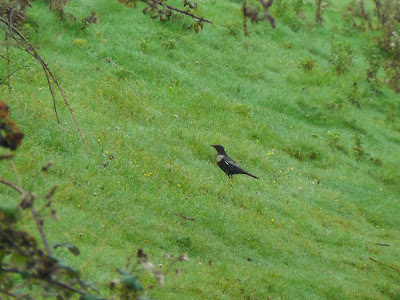 I was also pleased to catch up with this bird - a male Ring Ouzel or the Merlo-de-peito-branco as it is delightfully called in Portugal! This is the 'Blackbird of the mountains' and is on its way south to southern Spain or northwest Africa to spend the winter. Sadly, this species has been very much in decline, too, over the last 5 decades or so, which makes every sighting special. They're normally very shy and flighty, but this one flew into an Elder tree just a few metres away from me! By the way, if you're wondering where all of the Chiff Chaffs have gone, they're all here!!
Posted by Steve Plummer at 9:56 AM 2 comments: