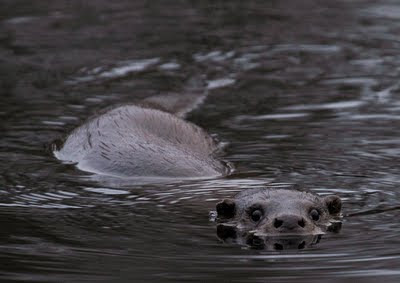 David Barnes' photo of the Otter at Priory Country Park has featured on this blog before, and I've included it again because it's the only photo of a Bedfordshire Otter that I've got, and because I want to celebrate finally catching up with an Otter this evening!!!

Over the past few months I've chalked up hours and hours of field-time, trying to record Otter, mainly focusing on dawn watches at Stewartby Lake. As Richard Lawrence, our Mammal Recorder, said at the Bedfordshire Natural History Society AGM last night, "There are a lot of Otters around and they're in all the watercourses!", but seeing one is not quite so straightforward!

Having found a spot where Otter(s) cross from the Nature Reserve to the River Ivel this morning, I stationed myself about 25m downwind and waited. This was just after 6.30pm which was pretty late: having done some last minute shopping, got caught in heavy traffic, and having trekked once again from Biggleswade! But, within 10 minutes, I looked up to find an Otter standing on the path right in front of me. It must have known that I was there but, after a few seconds, it sauntered down the steep bank and, presumably, into the River Ivel, though I never did see it again. What I'll always remember is that amazing tail which looks so long close up! I had planned to do my very best to catch up with Otter & Water Vole during this holiday week, and I've managed to see both - Wonderful!
Posted by Steve Plummer at 8:28 PM