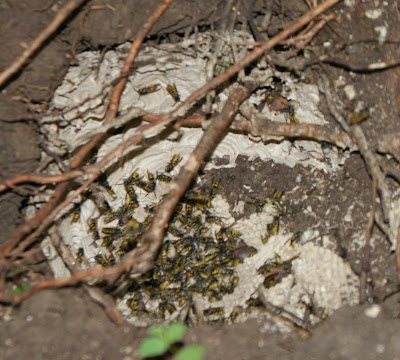 This morning, during the monthly Dormouse Box check at Maulden Wood, Ken, Marion and I came across this wasps’ nest that had been dug up overnight.

When I was a young boy, my friends and I used to dig up wasps’ nests, and in the French Dordogne a few years ago I was privileged to come across a Honey Buzzard in the process of ripping apart a wasps’ nest and devouring the grubs. But the culprit here was a Badger – the perpetrator had even left behind a calling card just a metre or so away…a deep freshly-filled latrine!

The Gwent Badger Group tell the story of a woman who called them to say that she had a badger digging a sett in her garden and asking for someone to come out. They write: ‘a GBG officer was sent out only to report back to the caller that the badger had actually dug up a wasps nest and had eaten the contents, to which she replied in so many words, “Blooming Heck, I paid £45 to have one of them removed last week!” Maybe the badger should have moved in first, I'm sure he would have loved the chance to dig it out for her and a bit of lawn seed is cheaper than the £45.’

Over the years I have found a number of these nests excavated by hungry Badgers, especially in this kind of weather when worms are harder to find. They are after the fat and juicy protein-rich grubs, though one person found 300 adult wasps in a Badger’s stomach….I couldn’t help but wonder whether the Badger had been unfortunate enough to suffer from anaphylactic shock!

It was the 3rd Dormouse box check of the season and, thankfully, one of the teams found a live dormouse, our first here this year. I didn’t get to see it, but there’s still three more checks to go, so I’m still hopeful!
Posted by Steve Plummer at 11:46 PM