Just after dawn this morning I went for a walk in Millbrook Warren, just a little way west of Ampthill. This is designated to be the next Centre Parcs complex with some 700 lodges planned. For obvious reasons, I’m one of the local NIMBY folk who would rather Centre Parcs chose somewhere else to build…Once the fences are up, one of my favourite local wildlife havens will be out of bounds!

I’ve had some great close views of Red Fox, Chinese Water Deer and Muntjac in the past and, some years ago now, I used to have regular brilliant views of a male Lady Amherst’s Pheasant in Moor Plantation, but that bird is long-gone and we only know of some half-a-dozen or so male birds remaining in the whole of Bedfordshire.

But this is a Pheasant wood and there are Common Pheasants a-plenty. Alongside the game strip in the adjoining field (the brown area above) there were good numbers of Pheasants, and I counted at least 21 Red-legged Partridge, too. A Buzzard mewed overhead and an unseen Skylark on the ground practised a few phrases intermittently. 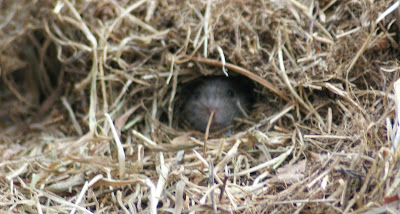 As I left the Plantation, I had a look under a corrugated tin refuge left behind by a wildlife consultant. An obviously-surprised Bank Vole stared up at me, wondering where his roof had gone. After a good 4 or 5 seconds he disappeared into the long grass. A few metres away there was another refuge and, lifting it up, I spotted this character giving me the once over – I think it was the same individual!

Close to the main road there is a large area bounded by white plastic sheeting. It is within this area that all of the Common Lizards caught in the wood have been placed prior to the possible destruction of their habitat. Several log-piles have been constructed within the perimeter. I didn’t see any Lizards, but what was almost certainly a Field Vole sought cover within one of the piles as I approached.

Whilst watching the Bedford Blues train this evening there was a constant stream of ‘tseeps’ heard from flocks of unseen birds passing over the tops of the floodlights – evidence of thousands of Redwings heading south.

I was passing the Heath and so parked up the car and went for a quick lunchtime walk. The highlight was a flock of a dozen or so Crossbills flying overhead and calling. I disturbed a pair of Muntjac deer which bounded into thick cover.
Posted by Steve Plummer at 11:49 PM