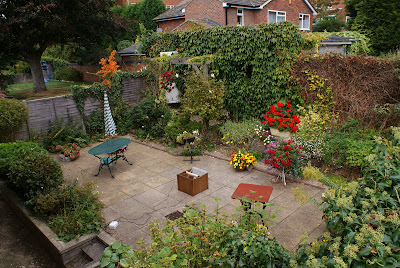 This is my back garden - the wooden box is my moth trap. The following is an article published in this Autumn's edition of Muntjac, the newsletter of the Bedfordshire Natural History Society.

Trapping the fly-by-nighters
by Stephen Plummer

Have you ever thought about setting up a regular moth trap in your garden? It’s something that I’d wanted to do for years but never got around to. I’d built up a small list of moths over the years, including a Swallow-tailed moth discovered in the bathroom, and a Hummingbird Hawkmoth that had somehow wandered into the kitchen, both recorded in the autumn of 2005. But I confess that I doubted whether my very small, mostly paved rear garden here in Ampthill would actually yield much.

Then last December I came across an email that Andy Banthorpe had forwarded to the Beds Moth Group from a representative of the Garden Moth Scheme (GMS), encouraging new people to get involved. After running in the West Midlands from 2003 to 2006, the GMS now has people all over the UK recording moths in their gardens once a week between March and November, and sending the results to the GMS on a spreadsheet for analysis.

This was the nudge that I needed. I contacted one of the Scheme’s representatives and was delighted to be offered a free 15W Actinic Skinner Moth Trap and accessories, one of 10 available to be given to new members.

In March of this year I started putting the trap out every Thursday night. After a few disappointingly empty traps, I was really excited on March 19th to find my first six moths: four Common Quakers, a Small Quaker and a Clouded Drab. Lift off! From then on the species list started to grow. Some of my favourites during those early days included The Streamer, a beautiful violet-tinged specimen, and the dramatic Nut-tree Tussock.

But I guess it’s the Hawkmoth family that has the biggest ‘wow’ factor for most of us. I just didn’t think I would ever get any on my little patch. Then on May 14th, I peered into the trap to find a stunning bright Lime Hawkmoth clinging to the sides. I couldn’t believe it!

And things got even better. On May 26th I put the trap out as usual, but awoke in the early hours to the sound of heavy rain outside my window. It was 2.30 am but I reluctantly decided to get up and move the trap into the garage, getting soaked in the process. In the afternoon I brought the trap out into the fresh air to dry and was overjoyed to find a Small Elephant Hawkmoth inside. A few days later I caught my first Elephant Hawkmoth and, since then, I have also added Privet Hawkmoth and Poplar Hawkmoth to the list...so I’d happily been very wrong in my assumptions!

By now, much to my wife Carole’s despair, I was getting hooked, and the trap was being set up several times a week! Throughout June the number of species recorded continued to rise: Figure of Eight, Bird’s Wing, Lime-speck Pug, Spectacle, Bee Moth, Brown China-mark, Common Emerald, Smoky Wainscot and other marvellously named specimens visited my tiny patch. One night towards the end of June I had over 100 moths in the trap comprising 43 species! Those that I didn’t know I photographed and put on my Blog. Our recorders, Andy and Melissa Banthorpe and David Manning, would take a look and help me ID them to species if my - admittedly poor - photos showed the relevant detail.

July was a memorable month. On the evening of July 2nd I joined Andy and Melissa who were running a few traps at Maulden Wood. It was the most incredible night and I managed to see most of the record number of over 160 species that were recorded! The highlight for me was the stunning black and white spotted Leopard Moth which fluttered to the light fairly late on. Andy and Melissa gave me permission to take it home to photograph. When I got home in the early hours, I wandered into the back garden to see what was in my own trap before turning in...only to find two Leopard Moths resting on the egg boxes!

It’s always exciting to find something rare. A neat but relatively featureless moth in my trap that same night turned out to be a Fen Wainscot, the 15th Bedfordshire record, and a small micro-moth that turned up on August 17th was identified by David from my Blog as Aroga velocella, only the 3rd Bedfordshire record. I reckon this one must have come from Cooper’s Hill where it was recorded in 1997.

So far my little patch has recorded 173 separate species: a real revelation to me. Let me encourage you to get yourself a trap and have a go if, like me, you’ve been putting it off for some time. Maybe you’d like to become a part of the Garden Moth Scheme. Our Recorders are always really helpful in giving advice and helping with identification, and your records are always appreciated. There is a Beds Moth Group on the Internet where you can learn how other people are getting on, and there are lots of other helpful websites to inspire you.

You just never know what will be there when you peer into the trap in the morning. But I warn you now: it’s addictive!
Posted by Steve Plummer at 9:12 AM