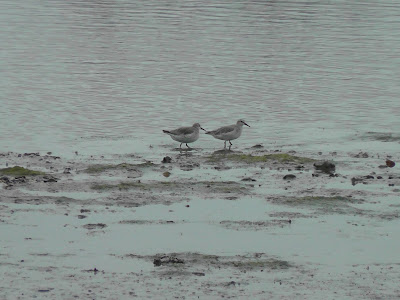 I was pleasantly surprised to come across these two Red Knot feeding together on the Western Yar close to the Freshwater Causeway this morning. They're the first Red Knot that I have seen on this western side of the island. Apparently, the bivalve mollusc Macoma is their preferred prey on European coasts, the animal being crushed in the muscular gizzard, but I don't know whether we get them here. I think these are both first year birds. Looking through the binoculars the chevron markings on the flank were particularly noticeable. The video below follows them as they make their way along the shoreline and gives a good indication of their size alongside the local Black-tailed Godwits.

I had another fascinating encounter a bit later on when I came across a Water Rail scrambling about in the top of the Hawthorn hedge just a few metres from my head!


And here's a challenge for you. The above video comprises a flock of Mediterranean Gulls that were on the opposite side of the river directly behind the feeding Red Knot. Have a look at the video above and see if you can count how many are present. It pans across a flock of Lapwing before reaching the main Gull colony. There are Black-headed Gulls there, too, but I counted over 100 Mediterranean Gulls through the binoculars! I've never seen so many before in one place!
Posted by Steve Plummer at 2:18 PM