I was going to watch one of the rugby internationals yesterday morning but, when I woke up to sunshine streaming through the window, I grabbed my net and drove to Walter's Copse, Newtown to survey for hoverflies. 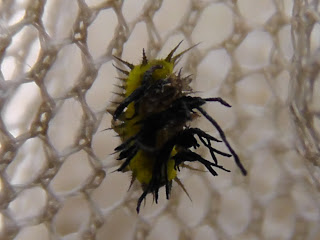 During one of my sweeps in the short vegetation, I came across this alien-like creature clinging to the side of the net. 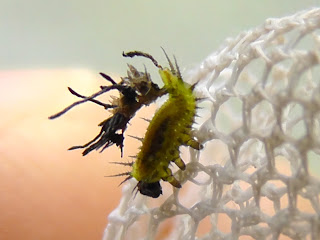 This angle from the side gives a clue as to what is going on....and it's fascinating. Thanks to the good folk at iSpot we've established that it is the larva of a Tortoise Beetle, probably the Fleabane Tortoise Beetle (Cassida murraea). There was plenty of Common Fleabane growing all around, so that sounds good to me! 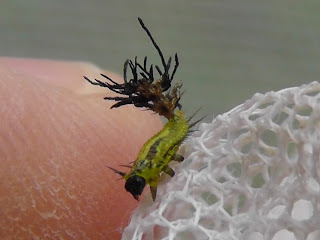 I love the way that a blogger in the United States expresses his amazement at the habits of Tortoise Beetle larvae: '....it's really super weird. The green oval-shaped thing with the spines is the actual creature. That big crinkly brown thing on its back? That's a mass of dried excrement. Poop. I couldn't make this stuff up. The larva actually holds this thing up over its back with a special "fork" on its hind end, and it can wave it around at will. Various internet sources suggest that this is some sort of defense mechanism, or a means of camouflage. Either way, blech. Also, ew.' 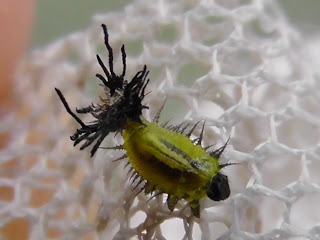 Apparently, the 'poop' can also include cast skins, and the fact that some Cassidine larvae feed on toxic plants gives an additional chemical defence.